Researchers from the RIKEN Brain Science Institute in Japan, in collaboration with Juntendo University and the Japan Science and Technology Agency, have discovered that a cell receptor widely involved in intracellular calcium signaling—the IP3R receptor—can be locked into a closed state by enzyme action, and that this locking may potentially play a role in the reduction of neuron signaling seen in neurodegenerative diseases such as Huntington's and Alzheimer's disease.

In the research published today in the Proceedings of the National Academy of Sciences, the scientists reported experiments in human cells and a mouse model of Huntington's disease revealing that transglutaminase type 2—a protein cross-linking enzyme elevated in the cells of patients with neurodegenerative diseases—interacts with the IP3R receptor to lock it in a closed non-functional conformation preventing it from fulfilling its essential calcium-releasing role. They identified a specific amino acid site on the receptor, Gln2746, where the modification takes place, deepening our understanding of how receptors are locked and potentially opening the door to studies on other functional proteins that are also regulated by conformational changes.

The IP3R channel, which is located in the endoplasmic reticulum, a protein assembly and transport compartment, plays a crucial role in intracellular calcium signaling, and is involved in a wide range of cell functions including mitochondrial energy production and the regulation of autophagy, the process through which cells consume and degrade unused components to maintain a healthy balance of functional proteins. Although autophagy is normally a mechanism that sustains cell maintenance, it can also trigger a loss of cell function and has been associated with prominent diseases including Huntington's disease, Alzheimer's disease, and Parkinson's disease.

In this work, the scientists propose a general model under which abnormal IP3R-mediated calcium signaling caused by the action of transglutamase type 2 leads to cellular dysfunction and subsequently to the emergence of progressive brain dysfunction. Transglutaminase 2 activation is commonly associated with inflammation and stress, and its action on the IP3R channel might provide an explanation for the initiation and progression steps common to different neurodegenerative diseases.

According to Katsuhiko Mikoshiba, who led the study, "We think that the mechanism we identified in this study could provide us with a more general model of other diseases both of the brain and other parts of the body, where transglutaminase type 2 is upregulated. We hope that this insight could eventually lead to the development of new drug therapies for a number of neurodegenerative diseases that place a high burden on patients and society." 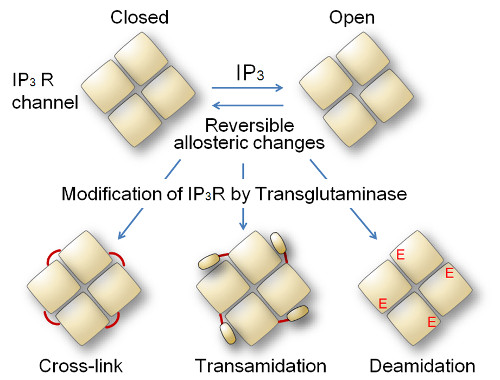 Model for transglutaminase-mediated modification of IP3R

This diagram shows the subunit arrangement of the allosteric coupling domain within the tetrameric IP3R. Our data suggest reversible configuration changes between the closed and open states. Transglutaminase catalyzes covalent intersubunit cross-linking which leads to the closed configuration. Large molecules also inhibit motion by transamidation. Gln2746 is deamidated and converted into a glutamate residue (E) that is resistant to transglutaminase-mediated inhibition. 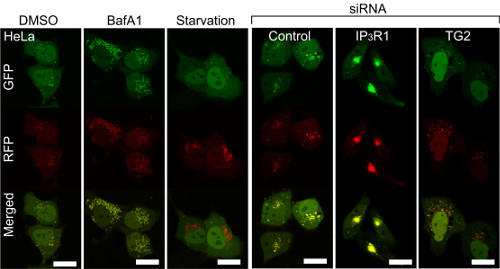 The loss of IP3R or transglutaminase by RNA interference (using siRNA) affects autophagy as measured by green (GFP) and red (RFP) fluorescent protein signals of an autophagosome indicator with tandem-fluorophores (GFP-RFP) in HeLa cells. We adjusted the sensitivity of microscopy for green and red fluorescent signals using bafilomycin A1 (BafA1) and amino acid-deprived HeLa cells as negative and positive controls, respectively.