Shedding new light on the formation of emotional fear memories

Everyday events are easy to forget, but unpleasant ones can remain engraved in the brain. A new study published in the Proceedings of the National Academy of Sciences identifies a neural mechanism through which unpleasant experiences are translated into signals that trigger fear memories by changing neural connections in a part of the brain called the amygdala. The findings show that a long-standing theory on how the brain forms memories, called Hebbian plasticity, is partially correct, but not as simple as was originally proposed.

The effort led by Joshua Johansen from the RIKEN Brain Science Institute in Japan and New York University scientists Lorenzo Diaz-Mataix and Joseph LeDoux, tested an influential theory proposed in 1949 by the Canadian psychologist Donald Hebb that neurons that are connected and fire electrical impulses at the same time increase the strength of their connections to form a memory. Previous work in reduced brain preparations had demonstrated that this process, called Hebbian plasticity, can increase the connection strength between neurons, but it remained untested during memory formation in behaving animals. To directly test this question, the team examined whether coincident electrical excitation of neurons which are known to store fear memories is necessary and sufficient to trigger changes in neural connections and memory formation.

The researchers used a technique called optogenetics to silence electrical activity in a brain area called the amygdala where fear memories are stored, as animals learned to associate an auditory tone and mild electrical shock. In accord with Hebbian theory, silencing electrical activity reduced memory formation and the prevented strengthening of the connections between auditory neurons and amygdala cells.

However, when they eliminated the shock and replaced it with optical excitation of amygdala neurons, no learning occurred. Surprisingly, learning was restored when cell surface receptors for a neuromodulator called noradrenaline, which is important for attention, were activated at the same time. The results demonstrated that Hebbian mechanisms are important but not sufficient for memory formation, but require concurrent activation of noradrenaline.

According to Johansen, "This work represents one of the first tests of an influential hypothesis for memory formation in the working brain. The findings from this work support the general premise of the hypothesis, but suggest that other factors such as noradrenaline are also crucial." The study provides a new perspective on how aversive experiences, such as being attacked by a dog, for example, are translated by the brain into emotional fear memories and may represent a general process to control memory formation in other brain areas. In a broader context, the ability to precisely control of fear memory may help to treat them when they are medically deleterious in conditions such as fearful anxiety or post-traumatic stress disorder. 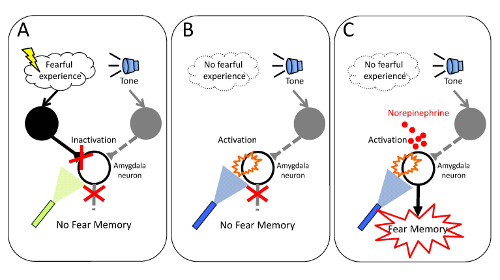 Schematic showing the importance of noradrenaline, adding complexity to the concept of Hebbian plasticity

In accord with Hebbian theory, silencing electrical activity reduced memory formation and the prevented strengthening of the connections between auditory neurons and amygdala cells (A). Eliminating the shock and replacing it with optical excitation of amygdala neurons, however, led to no learning (B). Surprisingly, learning was restored when cell surface receptors for a neuromodulator called noradrenaline, which is important for attention, were activated at the same time (C).