Researchers at the RIKEN Center for Developmental Biology in Japan have succeeded in inducing human embryonic stem cells to self-organize into a three-dimensional structure similar to the cerebellum, providing tantalizing clues in the quest to recreate neural structures in the laboratory. One of the primary goals of stem-cell research is to be able to replace damaged body parts with tissues grown from undifferentiated stem cells. For the nervous system, this is a particular challenge because not only do specific neurons need to be generated, but they must also be coaxed into connecting to each other in very specific ways.

RIKEN researchers have taken up this challenge, and the work published in Cell Reports details how sequentially applying several signaling molecules to three-dimensional cultures of human embryotic stem cells prompts the cells to differentiate into functioning cerebellar neurons that self-organize to form the proper dorsal/ventral patterning and multi-layer structure found in the natural developing cerebellum.

Expanding from their previous studies with mice, the researchers first established that under specific conditions, culturing human embryonic stem cells with fibroblast growth factor 2 (FGF2) leads to neural differentiation particular to the midbrain/hindbrain region—the location of the cerebellum—within three weeks, and the expression of markers for the cerebellar plate neuroepithelium—the part of the developing nervous system specific for the cerebellum—within five. These cells also showed early markers that are specific to developing Purkinje cells, granule cells, or deep cerebellar projection neurons—all types of neurons only found in the cerebellum.

The researchers then looked for mature cerebellar neurons. They found that cells treated with FGF2 expressed late Purkinje-cell markers and developed structures characteristic of those cells. Electrophysiological recordings of these cells after culture for about 15 weeks revealed proper responses to currents and to inhibition of receptors needed for normal cerebellar signaling, indicating that function had developed along with structure. Some FGF2-treated cells also expressed markers for the rhombic lip—the structure from which granule cells develop and migrate, and a marker specific to migrating granule precursors by week seven. Moreover, cells were seen to migrate and extend fibers that bent to form the T-shape characteristic of granule cell parallel fibers.

Where these neurons form and how they locate in relation to each other is critical in the developing brain. Early in cerebellar development, particular cell types become distributed unevenly from top to bottom, creating a dorsal-ventral separation. Researchers tested several factors, and found that adding FGF19 around day 14 to the FGF2-treated cells caused several flat oval neuroepithelium to form by day 35, expressing dorsal-specific markers on the outside and ventral-specific markers on the inside. By adding stromal cell-derived factor 1 (SDF1) between days 28-35, they were able to generate a continuous neuroepithelial structure with dorsal-ventral polarity.

SDF1 also induced two other important structural changes. The dorsal region spontaneously developed three layers along the dorsal-ventral axis: the ventricular zone, a Purkinje-cell precursor zone, and a rhombic lip zone. At one end of the neuroepithelium, a region developed that was positive for markers of progenitors of granule and deep cerebellar nuclei projection neurons and negative for Purkinje-cell markers, and whose origins could be traced to the rhombic lip zone of the cerebellar plate.

Lead author Keiko Muguruma says that, “the principles of self-organization that we have demonstrated here are important for the future of developmental biology.” She added that, “attempts to generate the cerebellum from human iPS cells have already met with some success, and these patient-derived cerebellar neurons and tissues will be useful for modeling cerebellar diseases such as spinocerebellar ataxia.”

Laboratory for Organogenesis and Neurogenesis
RIKEN Center for Developmental Biology 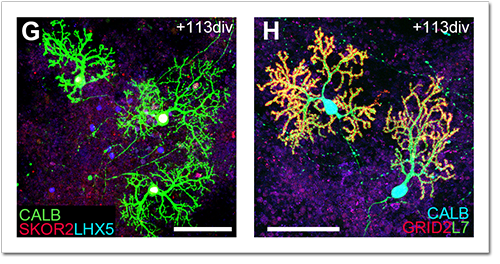 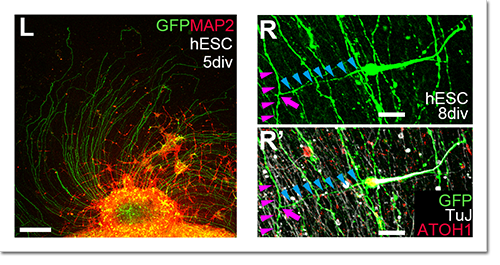 (Left) A clear separation can be seen with the outer side expressing dorsal-specific markers (KIRREL2), while the inner side expresses ventral-specific ones (FOXA2, NKX6.1). (Right) A schematic of the self-patterned neuroepithelium induced by adding FGF19 to the FGF2-treated cells. 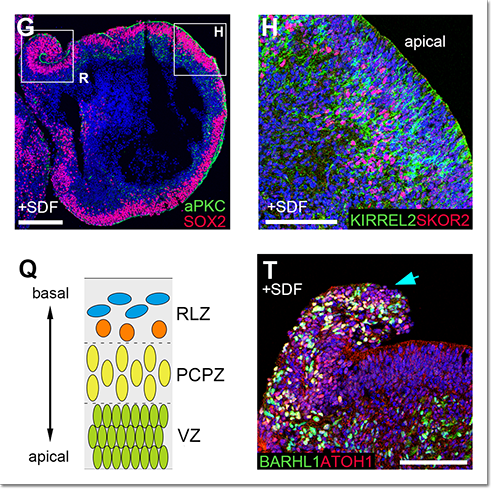