In nature, supramolecular complexes—chain-like structures that are composed of many small units linked mainly by weak non-covalent bonds—are assembled and disassembled in a precisely controlled way. Now, in work published in Science, researchers from the RIKEN Center for Emergent Matter Science, led by Takuzo Aida, have demonstrated a new method for artificially building and dismantling supramolecular polymers in a tightly controlled and selective way, following the methods of traditional polymer chemistry by taking advantage of the monomer elements' own tendency to self-organize. This opens the way to the creation, though precision supramolecular engineering, or polymers with a wide range of properties that could be exploited for new applications.

The work began from a serendipitous observation in an earlier experiment that a certain molecule, containing a corranulene core, seemed to exist in a stable state but that, when an initiator was added to the solvent, it began to self-assemble into a polymer. Importantly, the researchers found that the assembly took place not through a step-growth where, like people reaching out their hands to form a human chain, the units combine in groups of two, then four, quickly leading to a long chain, but rather through a chain-growth process—where growth takes place by the addition of new units at one end of a chain. Monomers added to the solvent would join the chain as long as the initiator was present, allowing the size of the chains to be precisely controlled by varying the proportion of monomer and initiator. They found that the process could be performed at room temperature and pressure, simply by adding a given mixture of monomers and initiator to the solvent. The chains could also, they discovered, be easily disassembled.

Importantly, the group discovered that they were able to create polymers that are of the same chirality (either left- or right-handed) by adding an initiator with the specific chirality to the solvent. This is important because there are cases where, for example, a drug of one chirality will be biologically useful, whereas the opposite enantiomer will be useless or, in the worst case, harmful. Frequently, a pure material will have quite different properties from a racemic mixture, which contains equal amounts of each of the enantiomers. This finding was also important because it allowed the scientists to exert control over the final geometry of the chain.

Daigo Miyajima, who along with Aida is corresponding author, says, "What is exciting is that, based on lessons from polymer chemistry, we were able to build these macromolecular polymers in a chain-growth rather than step-growth fashion. This has made it possible to control the length of chains, the sequence of molecules, and even the stereochemical structure, and through this we hope to contribute to progress in precision macromolecular engineering."

Looking to the future, Aida adds, "Supramolecular polymers can have semiconducting properties if properly designed, so this method could be used to reduce the size of transistors. In addition, we found that the polymers can be easily disassembled, with almost 100 percent yield, so materials produced through this method will be completely recyclable—an important property for creating a sustainable society." 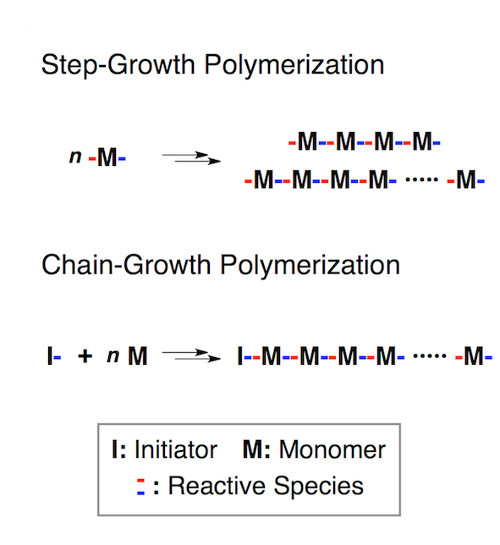 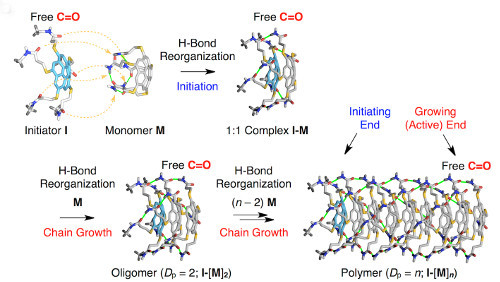 The growing polymer carries an initiator unit at one end (the initiating end), whereas the other end (the active end) adopts a structure analogous to I. This structural feature prevents bimolecular coupling of the propagating ends.

Schematic representation of the stereo-selective chain-growth supramolecular polymerization of monomers MR and MS with initiators IR and IS, where the monomers and initiators both carry chiral side chains