Researchers at the RIKEN Brain Science Institute in Japan engineered a fluorescent protein that rapidly assembles into large crystals inside living cells, and showed that cells actively targeted the crystals for degradation. The unprecedented size and purity of these crystals allowed an analysis of the protein’s structure directly within the intact cell. The researchers were able to observe the crystallization process and the cell’s responses in real-time, potentially transforming the production and study of protein crystals.

In the study published online today in Molecular Cell, the research team led by Dr. Atsushi Miyawaki genetically engineered a fluorescent protein that can rapidly self-assemble into well-formed single crystals—highly ordered structures composed of individual units arranged in a repeating lattice—in live mammalian cells, based on a sample of a fluorescent coral brought back from Okinawa.

They isolated the gene encoding the green fluorescent protein, called KikG, and tweaked its structure so that the color changed from green to red when struck by a particular wavelength of light. However, in a surprising discovery, they observed the emergence of large, micron-sized fluorescent crystals in the cells used to make the proteins, which they named Xpa.

Prior to the crystallization, the green-colored Xpa proteins are distributed evenly throughout the cell. A video of the process shows a large fluorescent crystal appearing suddenly within one frame of the video—a ten minute interval—but the actual process occurs much faster, within just a minute. Once crystallization begins, individual Xpa proteins are rapidly recruited into the growing crystal until the cell’s cytoplasm becomes clear.

According to Miyawaki, "This was quite a fortuitous discovery, because the ability to crystallize proteins makes it possible to determine their atomic structure." Normally, creating a crystal big enough for analysis requires weeks or months, and sometimes no crystal forms. In contrast, the crystals grown by the RIKEN team appeared in minutes and were so pure that they could be examined directly, without being removed from the cell, at RIKEN’s SPring-8 facility. This is the first time such a feat was accomplished in animal cells, opening the door to analysis of protein structure directly inside cells.

A second intriguing finding was that the cells attempted to rid themselves of the crystals through a process known as autophagy. "There may be evolutionary pressure to discourage crystal formation in mammalian cells," says Miyawaki. The group discovered that the crystals were rapidly covered by a membrane structure called the lysosome—the acidic, digestive compartment of the cell. Usually, proteins are efficiently broken down by the lysosome, however, because Xpa originally came from coral, the crystals could not be digested and remained in the cell.

Miyawaki believes there may be undiscovered protein crystals inside cells that can be either beneficial or harmful to the cell, but have been overlooked because they are not fluorescent. "There may be similarities between Xpa protein crystallization and the formation of pathogenic protein aggregates in diseases like Alzheimer's," said Dr. Miyawaki. "We hope to develop fluorescence detection systems for crystal growth to screen for molecules that affect the cell’s response to pathogenic protein aggregates, with the hope that this will lead to medical advances in the future."

Xpa crystal inside a live cell

From left: The cell seen under a light microscope, the fluorescent green Xpa crystal, the light and fluorescent images merged

The whole cell can be seen in the right panel, while the middle and right panels show the crystal at higher magnification with arrows pointing to the lysosomal membrane covering the crystal. 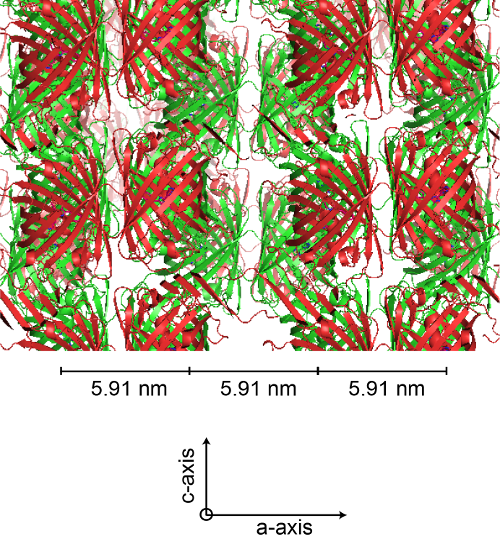 Molecular structure of the Xpa proteins arranged in the crystal lattice