Obesity-related receptors have a unique structure

A collaboration led by Shigeyuki Yokoyama of RIKEN and Takashi Kadowaki and Toshimasa Yamauchi of the University of Tokyo has used the SPring-8 synchrotron facility in Harima, Japan to elucidate the structure of two receptors of adiponectin, a protein that is associated with obesity and diabetes. The researchers hope that in the future this work, which was published in Nature today, will pave the way toward designing drugs that target these two receptors, AdipoR1 and AdipoR2, to reduce the early mortality associated with diabetes.

Adiponectin, a hormone secreted by fat cells, is known to be involved in the regulation of glucose and fatty acid oxidation. Its levels are reduced in patients with both type 1 and type 2 diabetes, and giving the hormone to mice has been reported to improve glucose intolerance. In addition, administration of a recently discovered adiponectin receptor agonist, AdipoRon, to genetically obese mice led to improved glucose intolerance and longer lifespans.

Since adiponectin binds to two receptors, AdipoR1 and AdipoR2, Yokoyama, who leads the RIKEN Structural Biology Laboratory, and his team surmised that understanding how this binding takes place could contribute to the creation of drugs that target these receptors. Adiponectin receptors are evolutionarily conserved in many living beings, including mammals, plants, and yeasts, so it seemed clear that they should play an important biological role.

Using the microfocus beamline at the SPring-8 synchrotron facility, the group obtained crystallographic images of the two receptors at resolutions of just 2.9 and 2.4 angstroms, and came up with a surprising finding. The structure of the receptors was found to be a completely new type that is unlike G protein-coupled receptors, the most common type of receptor targeted by drug therapies. Intriguingly, the receptors were found to incorporate a zinc ion held in place by three histidine amino acid residues.

They also discovered that the receptors have large internal cavities, whose function is unknown, though Yokoyama speculates that they might be used as the entrance and exits for the substrates and products of the receptors' activities.

According to Yokoyama, "Analyzing the structure of these two receptors provided us with a number of interesting surprises. We believe that this new information on the structure of the adiponectin receptors will help us understand new relationships between the structure and functions of these important receptors, which we know to be evolutionarily conserved, and hopefully will contribute to the development of new adiponectin receptor agonists that can be used for the treatment of obesity-related diseases such as type 2 diabetes. The discovery of the presence of a zinc ion is also fascinating, though more work will be required to understand its significance."

The research was carried out by researchers from the RIKEN Structural Biology Laboratory, RIKEN Center for Life Science Technologies, along with colleagues from the University of Tokyo. 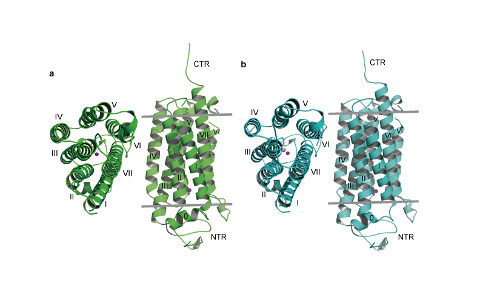 Overall structures of the AdipoR1 and AdipoR2 receptors 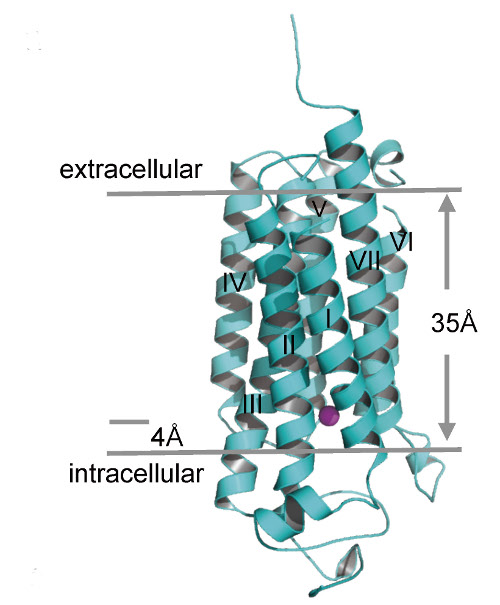 The zinc-binding site in the AdipoR2 structure

The magenta sphere shows the location of the zinc-binding site in the AdipoR2 structure. 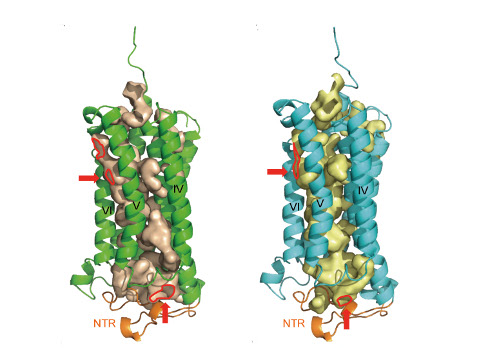 The large internal cavities in the AdipoR1 and AdipoR2 structures

The red arrows indicate the openings of the cavities.