A recipe for long-lasting livers

People waiting for organ transplants may soon have higher hopes of getting the help that they need in time. Researchers at the RIKEN Center for Developmental Biology have developed a new technique that extends the time that donor organs last and can also resuscitate organs obtained after cardiac arrest. The work published in Scientific Reports details a procedure that cools organs down to 22 °C (71.6 °F) and slows down organ function while still supplying oxygen, resulting in more successful transplants than the current standard methods. Team leader Takashi Tsuji notes that this system should quickly increase the pool of available donor organs and could even be used to grow whole 3D organs in the future.

Typically, donor organs are kept at a static temperature of 4 °C in preservation solution and have preservation times of only about 6 hours for hearts and lungs, 12 hours for livers, and 20 hours for kidneys. Lengthening these times is a high-priority goal in transplant research, and the team at RIKEN was able to do so using a 3D organ-perfusion system that supplies oxygen to the donor organ and keeps it at an ideal temperature.

Using a rat model for liver transplant, they isolated livers, placed them in culture, and hooked them up to a perfusion system that can pump essential fluids through the organs—including red blood cells, which carry much-needed oxygen. They assessed liver function at several different temperatures by measuring concentrations of certain protein markers—alanine aminotransferase, which rises in dysfunctional livers, and albumin, which is higher in healthy livers. Analysis of these markers and bile production—another sign of a healthy liver—showed that livers remained healthy the longest—up to 2 days—when preserved at 22 °C with red blood cells added to the perfusion culture. 3D-image analysis showed that when red blood cells were used, fewer liver cells died, and the complex structure of the livers remained intact.

After determining that liver cells cooled to 22 °C—but not lower—will begin to multiply again and exhibit healthy metabolism when warmed, the researchers compared the effectiveness of transplanting livers preserved for 24 hours by their new method with those preserved for 24 hours at the standard static 4 °C. Seven days after the transplant, they cut out most of the recipient’s natural liver, and through this manipulation, could be sure that they were only analyzing the function of the transplanted liver. While only 20% of rats that received statically preserved livers survived after this partial hepatectomy, 100% survived after receiving livers preserved using the new hypothermic perfusion system that included red blood cells. Careful analysis showed that seven days after the partial hepatectomy, the new livers, which had been smaller than normal when transplanted, had grown to acceptable weights, and markers of liver function had returned to normal levels.

The team also tested their system on livers similar to those donated after a person has died from cardiac arrest, which in practice often go unused because they are frequently severely damaged. When red blood cells were added, these livers showed many signs of normal function after transplant, and survival rate was 100% even after partial liver removal seven days after transplant. In stark contrast, when these types of livers were transplanted using static 4 °C preservation or the new perfusion system without red blood cells, none of the rats survived after the partial hepatectomy.

While there is still a ways to go until this method will be available for humans, Tsuji is optimistic. “Optimizing the scale of the system for humans while still making it portable,” he says, “will likely take about 3 years. Once that is accomplished, we should be able to begin the first human trials within a year or two.” 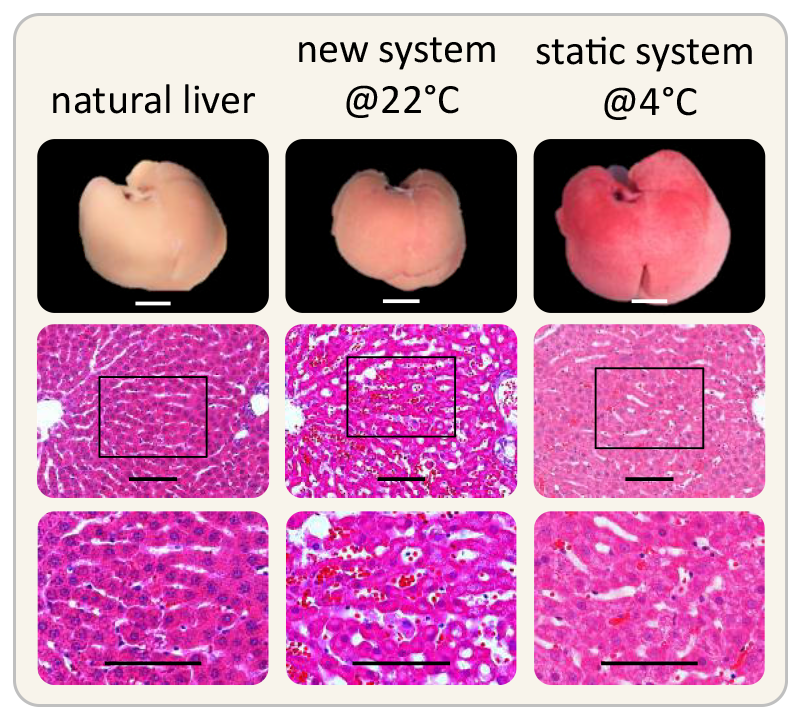 Comparison of Natural and Preserved Livers