For the violent r-process, the devil’s in the details

Using RIKEN’s Radioactive Isotope Beam Factory—one of the world’s most powerful devices for the creation of exotic atomic nuclei—scientists from RIKEN have, with international collaborators, made precise measurements of the half-lives of 110 nuclei, 40 of which had never been measured before. These nuclei are located at the boundary of the known nuclear chart, and despite their short lifetimes—measured in milliseconds—these nuclei imprint their properties on the chemical composition of the universe. This research, published in Physical Review Letters, is a major step forward toward providing an experimental ground for models of the mysterious astrophysical “r-process” which is believed to be responsible for the creation of many of the elements in the universe heavier than iron.

The r-process can only take place in extreme conditions such as when the core of a supernova collapses to become a neutron star, releasing tremendous energy in the process. Under those extreme neutron-rich conditions, atomic nuclei absorb neutrons to become increasingly heavy, and then undergo beta decay, leaving the nucleus one element higher on the periodic table. Gradually, the nuclei creep up the periodic table, leading to the creation of new elements.

There are hundreds of isotopes that participate in the process, which takes place extremely rapidly. Without an accurate knowledge of the half-life of each of these isotopes—how quickly it casts off an electron—it is difficult to make a model that can accurately describe the violent processes that lead to the creation of the elements that we see today.

While significant progress has been made in understanding this complex process, the current models cannot fully explain the abundances of elements found in stars, and work is still ongoing to create more perfect models.

According to Giuseppe Lorusso, who led the research while serving as a postdoctoral researcher at RIKEN, “It was very exciting to explore unknown territory in the nuclear chart and discover the half-lives of isotopes that had never been measured before. This new data allows us to get closer to understanding the mystery of nucleosynthesis. The use of the new experimental data removes some longstanding discrepancies between calculated and observed r-process abundances patterns, showing that current models may actually be capturing the essential physics of the r-process.”

However, the findings also brought a surprise. “We found,” he continues, that “after reducing the uncertainties of nuclear physics with our measurements, the difference in the abundance of elements such as tin, antimony, iodine, and cesium, among very old stars created in the early universe can be understood as originating from differences in the r-process conditions. This opens up the possibility that by looking at the distribution of elements in those stars, we can gain an understanding of the precise environment in which the r-process took place.”

To perform the research, the team used the RIBF to generate exotic nuclei by colliding a uranium beam with a beryllium target. Using the WASA3Bi detector, which measures beta decays, and the EURICA array that measures gamma emissions, the group took high-precision measurements of the half-lives of nuclei produced by the fission of the uranium. 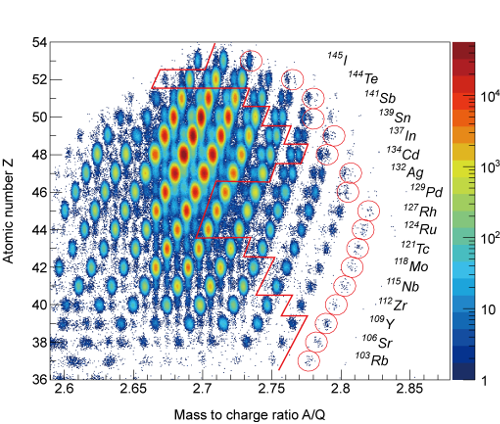 Nuclei with newly measured half-lives are on the right side of the red solid line. The heaviest masses for which half-lives can be measured are tagged for reference by red circles. The half-lives reported in this article are for the elements from rubidium (Rb) to tin (Sn).