How your brain knows it’s summer

Researchers led by Toru Takumi at the RIKEN Brain Science Institute in Japan have discovered a key mechanism underlying how animals keep track of the seasons. The study, published in Proceedings of the National Academy of Sciences, shows how circadian clock machinery in the brain encodes seasonal changes in daylight duration through GABA activity along with changes in the amount of chloride located inside certain neurons.

Seasonal time keeping is important for animals as well as people, and recent studies indicate that it is accomplished by the same part of the brain that governs our daily circadian rhythms. This brain area, called the suprachiasmatic nucleus (SCN), cyclically expresses certain “clock” genes during a 24-hour period, but not all of the neurons march to the same beat. Two regions in the SCN are slightly out of phase, and as day length increases, so does the phase gap between them.

To understand how this happens, the researchers first measured expression levels of the clock gene Bmal1 in explanted dorsal and ventral SCNs of mice that had been living in long-day or short-day light cycles. As expected, cyclical Bmal1levels in dorsal and ventral regions from the long-day group were out of phase, while those from the short-day group were synchronized. Modeling analysis predicted that coupling between the two regions is not a two-way street, and that this asymmetry causes the dorsal region to become out of phase when daylight increases.

The research team found that the neurotransmitter GABA plays an important role in this process. In most cases, GABA inhibits the activity of neurons. However, some SCN neurons are actually excited by GABA. Lead author Jihwan Myung explains, “GABA becomes excitatory when chloride levels inside neurons are high. We suspected that changes in GABA function across the SCN could represent the repulsive force that pushes these two clusters of neurons out of phase.”

When the researchers blocked GABA activity, the large phase gap seen in the long-day group disappeared and the cycles of Bmal1levels came to resemble those of the short-day group, which was unaffected. This suggested to the team that GABA has a special effect on the dorsal SCN.

To test this hypothesis, they measured expression levels of two other genes—Nkcc1 and Kcc2—that are responsible for importing and exporting chloride. They found that in long-day SCNs, the expression ratio of the two genes in the dorsal SCN changed so that much more chloride was imported. This made the effect of GABA preferentially excitatory in the dorsal region. Blocking chloride import abolished the phase gap seen in the long-day group, and as predicted by the model, even made SCNs trained on an even 12-hour daylight cycle resemble the short-day group.

“Just like in other animals, our bodies keep track of the seasons,” says Myung, “and sudden changes in seasonal day length can cause severe mood disorder in some individuals. Understanding how to adjust our internal seasonal clock could lead to effective ways of helping people whose internal clocks have been disrupted.” 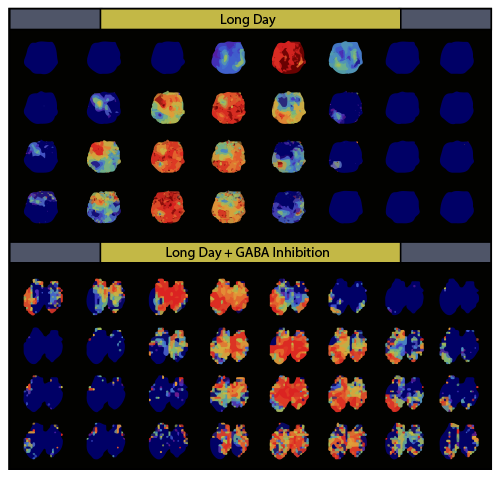 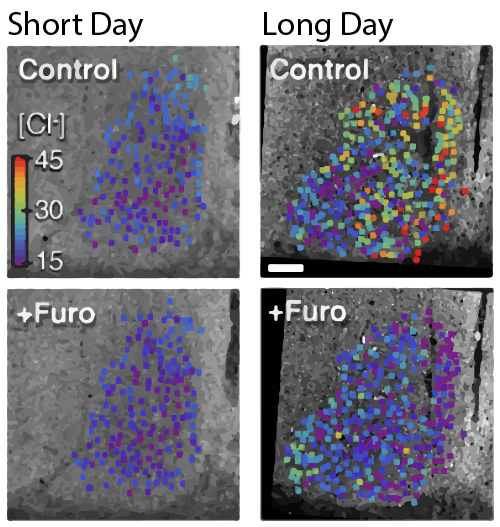 Exposure to long days leads to increased chloride in the SCN