When egg cells form with an incorrect number of chromosomes—a problem that increases with age—the result is usually a miscarriage or a genetic disease such as Down syndrome. Now, researchers at the RIKEN Center for Developmental Biology in Japan have used a novel imaging technique to pinpoint a significant event that leads to these types of age-related chromosomal errors. Published in Nature Communications, the study shows that as egg cells mature in older women, paired copies of matching chromosomes often separate from each other at the wrong time, leading to early division of chromosomes and their incorrect segregation into mature egg cells.

These groups of four chromosomes—called bivalents—then split apart into single pairs, and the cell divides. One part continues as the egg cell and the other part degrades. In the second stage of meiosis, the single pairs of chromosomes—two sister chromatids joined in the middle—separate and the egg cell divides again in the same way, leaving a single mature egg cell with one copy of each chromosome.

“What we found,” explains team leader Tomoya Kitajima, “is that in older cells, the bivalents sometimes separate early, and this leads to division of sister chromatids in the first stage of meiosis, rather than in the second stage.”

To determine the most common type of age-related segregation errors, the researchers first used a novel high resolution imaging technique to visualize chromosomes in live mouse egg cells throughout the whole first stage of meiosis. They found that chromosomes were always distributed correctly in young egg cells, but that a little less than 10% of older cells suffered from segregation errors. Closer examination of the chromosome-tracking data showed that the dominant type of error was predivision of sister chromatids, and not movement of intact chromosome pairs to only one of the new cells.

The tracking data also allowed researchers to go back in time and look at what was happening to chromosomes that eventually segregated incorrectly. They found that a large majority of them had been part of bivalents whose connection between paired chromosome copies had become hyperstretched and then snapped earlier in meiosis, leaving single pairs.

The researchers then confirmed that the number of singly paired chromosomes—also called univalents—was higher in older mouse and even human egg cells, indicating that age-related segregation errors could be tracked back to increased numbers of prematurely separated chromosome pairs. “We were surprised and pleased that the vast majority of errors are preceded by a single common event—bivalent separation,” says Kitajima. “Now we can focus our efforts on developing an artificial tie to suppress premature separation and on understanding the molecular mechanism underlying the age-related reduction in bivalent cohesion that appears to precede it.” 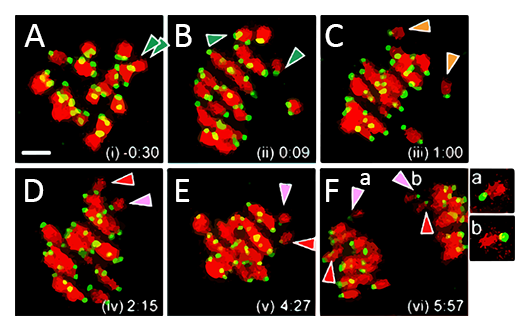