Blocking differentiation is enough to give cells “stemness”

Though immune therapy and regenerative medicine are promising areas of research for future medical therapies, they are limited today by the difficulty of creating stem cells, and scientists around the world are searching for ways to create somatic stem cells in the easiest way possible. Now, a collaboration between the RIKEN Center for Integrative Medical Science (IMS) and other institutions in Japan and Europe have found that in immune cells, simply blocking a transcription factor that leads to differentiation is sufficient to keep cells in a multipotent stem cell-like state where they can continue to proliferate and can later differentiate into various cell types.

Efforts in the past to create stem cells have typically involved finding ways to take target cells and “dedifferentiate” them into multipotent cells, but this is typically a painstaking process.

According to Tomokatsu Ikawa, the first and corresponding author of the paper published in Stem Cell Reports, “We decided to look at the possibility that somatic stem cells could be maintained in a stem cell-like state where they could proliferate without undergoing differentiation.” To test this, the team took mouse hematopoetic progenitor cells—cells that give rise to white blood cells—and modified them to overexpress a protein called Id3. Id3 inhibits the expression of E-proteins, which are involved in differentiation in somatic cells. They then placed the cells into culture conditions containing certain cytokines, and instead of differentiating into B-cells, the cells continued to divide as stem cells. When placed in a culture that did not contain those cytokines, the cells differentiated into various immune cells. To test whether the cells would maintain their multipotency in living animals, the researchers transplanted them into mice whose white blood cells had been depleted, and showed that the new cells could expand and differentiate into various types of white blood cells.

To explore the potential for application, the group then attempted a similar experiment using human blood stem cells taken from umbilical cords, which they transfected with a vector encoding human Id3. They found that like the mouse cells, these human cells could be maintained in a dividing state and then prompted to differentiate by changing the conditions.

“With this work we have succeeded in showing,” says Ikawa, “that the cells can be kept in a state of undifferentiation where they will proliferate extensively. This is both a useful tool for giving us a better understanding of the genetic and epigenetic program controlling the self-renewal of stem cells, and on a practical side, it could allow us to inexpensively produce large numbers of immune cells, which could then be used for regenerative medicine or immune therapy.”

The research was done by RIKEN in collaboration with Kyoto University, Maastricht University Medical Centre in the Netherlands, Osaka University, and Nihon University School of Medicine. 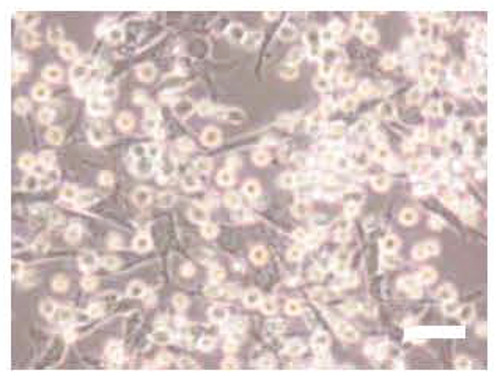