Calcium waves in the brain alleviate depressive behavior in mice

Researchers at the RIKEN Brain Science Institute in Japan have discovered that the benefits of stimulating the brain with direct current come from its effects on astrocytes — not neurons — in the mouse brain. Published in Nature Communications, the work shows that applying direct current to the head releases synchronized waves of calcium from astrocytes that can reduce depressive symptoms and lead to a general increase in neural plasticity — the ability of neuronal connections to change when we try to learn or form memories.

Transcranial direct current stimulation (tDCS) is a well-known and effective procedure that has been used for decades to clinically treat major depression. The procedure is non-invasive, lasts about 30 minutes, and involves targeting specific brain areas by applying weak electric current through the head. In addition to reducing symptoms of depression, it has even been shown to enhance learning and synaptic plasticity in both humans and animals.

“While we have known the clinical benefits of this kind of stimulation for quite some time,” notes team leader Hajime Hirase, “our research is aimed at understanding the cellular mechanisms through which its effects are made possible.”

Because calcium levels in astrocytes — a type of non-neural glial cell in the brain — have recently been shown to be important for transmitting signals that help neurons form connections with each other, Hirase and his team decided to examine brain activity during transcranial direct current stimulation using calcium imaging.

To accomplish this, they first made a transgenic mouse that expresses a fluorescent calcium-indicator protein in astrocytes and a subset of neurons in the brain. With this setup, they were able to image brain-wide calcium activity with a standard fluorescence microscope.

When they monitored calcium levels, they found that transcranial stimulation caused large amplitude surges of calcium. “Surprisingly, the calcium surges occurred very quickly after stimulation onset,” explains lead author Hiromu Monai, “and appeared synchronized all over the cortex not only near the stimulated location.”

The calcium surges were absent when the same experiment was performed on mice in which rising calcium levels in astrocytes were prevented, either through knocking out a key receptor or by pharmacologically blocking another one. This allowed the researchers to know that astrocytes, not neurons, were the source of the waves. This was confirmed when they expressed the fluorescent marker using two different recombinant adeno-associated viruses, allowing them to distinguish calcium in neurons from calcium in astrocytes.

Next, they examined the importance of the calcium surges using a mouse model for stress-induced depression. While transcranial stimulation can normally reduce depression-like behavior in these mice, it failed when they blocked the astrocytic calcium surges. “This suggests that the positive effects of transcranial direct current stimulation on depression lie in these wide-spread calcium surges,” says Monai. “But, we also wanted to investigate their effects on neural plasticity in general.”

To examine this role of astrocytic calcium surges, the team looked at changes in sensory responses after transcranial stimulation. They measured the responses to flashes of light and whisker perturbation, and found that they were more than 50% greater after stimulation — an effect that lasted for 2 hours after stimulation was over. These plastic changes in neuronal responses disappeared when calcium surges in astrocytes were prevented, indicating their importance in helping to change the connectivity between neurons.

“That this mechanism is mediated by astrocytic activity is exciting and hints that astrocytes could be a major therapeutic target for neuropsychiatric diseases,” notes Hirase. “Additionally, glial activation by transcranial direct current stimulation should be carefully examined in primates (including humans), and perhaps safety standards should to be re-evaluated from the standpoint of glia. 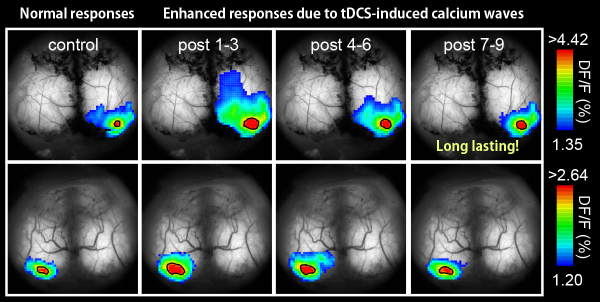