Scientists from the RIKEN Center for Advanced Photonics (RAP) have, for the first time, successfully used a terahertz laser to induce permanent changes in the conformation of a polymer, giving it an increased pattern of crystallization. Conformational changes are very important for macromolecular science because they can change the characteristics of a material and, in the case of proteins, can make it either possible or impossible for them to perform a certain biological function. The work, done in collaboration with Osaka University, was published in Scientific Reports.

According to Hiromichi Hoshina of RAP, “Terahertz lasers offer promise as a way to modify materials, because they resonate at a frequency close to the oscillations of the hydrogen bonds that bind polymers into certain conformations, but are much lower in energy than the covalent bonds that make up the molecular structure of the polymers. As a result, they could offer a ‘soft’ way to change the conformation without inducing chemical changes.”

One of the difficulties, however, of using terahertz wave irradiation to induce changes is that the materials tend to revert very quickly to the state of thermal equilibrium states. To overcome this challenge, the group decided to perform experiments on a polymer undergoing solvent casting crystallization—a process through which the conformation is fixed. This allowed them to effectively “fix” the results of the work and detect any changes.

The experiment was successful. When the group irradiated a polymer—a poly(3-hydroxybutylate)/chloroform solution—with terahertz radiation with a peak power of 40 megawatt/cm2, using a terahertz free-electron laser FEL developed by the Institute of Scientific and Industrial Research at Osaka University, they found that the crystallization of the material was increased by 20%.

“We were happy with these results, but we were also surprised by what we saw,” continues Hoshina.”The researchers were intrigued, however, by the fact that the peak power used in this study was quite lower than previous reports using NIR and visible lasers. They considered that the crystallization might have been caused by changes in temperature, but measured it and found that the difference between regions was less than 1 degree Celsius, much too small a difference to account for the difference. They also considered that the terahertz waves might have directed caused increased vibrations between the molecules but did not find any significant correlations with the wavelength—something that should have happened if the effect was due to differences in resonance.

According to Hoshina, “We have, for the first time, shown that terahertz waves can effectively induce a rearrangement of the molecules in polymer macromolecules. The exact mechanism through which this happens remains a mystery, though we speculate that it might be related to the generation of shockwaves in the material, and we plan future work to find out exactly what is special about these terahertz waves, which have often been called the ‘unexplored frontier of the electromagnetic spectrum’.”

“We are excited by this work,” he continues, “as this could give us a new tool for controlling the structure of ‘fragile’ molecules and allowing us to discover new functional materials.” 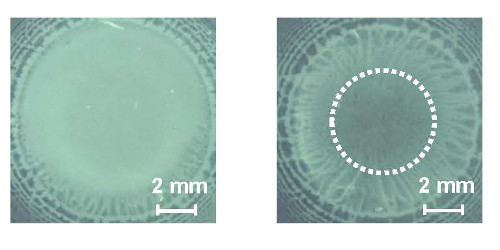