Researchers at the RIKEN Center for Sustainable Resource Science in Japan have shown that torrefied biomass can improve the quality of poor soil found in arid regions. Published in Scientific Reports, the study showed that adding torrefied biomass to poor soil from Botswana increased water retention in the soil as well as —the amount of plant growth.

When high temperatures and the absence of oxygen are used to bring about the decomposition of biomass residue from agricultural products such as grains, the result is a charcoal-rich substance called biochar. Torrefied biomass — sometimes called bio-coal — is a type of biochar made at relatively lower temperatures that has recently received attention as a pretreatment method for biomass utilization.

In order to characterize the biological properties of soil treated with biochar, the team incorporated torrefied plant residual biomass from the biodiesel crop Jatropha curcas into aridisol, a type of soil found in arid regions such as Botswana, and compared several soil properties with samples that had not been treated.

Explained team leader Jun Kikuchi, “Jatropha is a potential biomass resource for dryland African landscapes, but the poor climate and soil conditions have limited its production. Our study shows that treating the poor soil with torrefied biomass improves a variety of factors that ultimately lead to greater plant growth.”

An important quality of good soil is its ability to retain water. Tests showed that water retention increased with the percentage of torrefied biomass, with 5% biomass yielding a soil that contained about 5% more water than the control soil. A good soil also remains structurally sound deeper in the ground where pressure from above is higher. Soil treated with 5% torrefied biomass showed significantly higher levels of compression stress than the control soil, and significantly shorter relaxation time — the time needed for it to relax back into its normal shape after being compressed.

Other important features of soil are its metabolic and microbial components. Some compounds produced by the degradation and break down of cellulose are known to promote plant growth. The researchers found that levels of these organic acids, such as lactate and acetate, were higher in the treated soil, again supporting the idea that torrefied biomass can enhance soil fertilization. The treated soil also showed higher levels of Devosia sp. And Opitutus sp., bacteria that use lactate as a carbon source. This indicated that the soil metabolites available in the treated soil allowed for a different microbial environment that presumably acted to enhance plant growth.

“Our next step,” says Kikuchi, “is to elucidate the complicated reactions between symbiotic microbiota and plants for effective growth in nutrient-poor environments.” 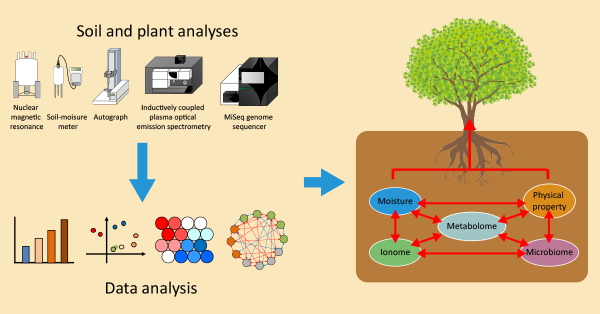 Several soil properties were analyzed after mixing soil with torrefied biomass and compared with control. Water retention and structural integrity, along with metabolites, the microbiome, ion absorption, and plant growth were all improved with the addition of torrefied biomass.