Though a variety of immunotherapy-based strategies are being used against cancer, they are often hindered by the inability of the immune response to enter the immunosuppressive tumor microenvironment and to effectively mount a response to cancer cells. Now, scientists from the RIKEN Center for Integrative Medical Sciences have developed a new vaccine that involves injecting cells that have been modified so that they can stimulate both an innate immune response and the more specific adaptive response, which allows the body to keep memories and attack new tumor cells as they form. In the study published in Cancer Research, they found that the vaccine made it possible for killer CD8+T-cells—important players in the immune response against cancer—to enter the tumor microenvironment and target cancerous cells.

According to Shin-ichiro Fujii, leader of the Laboratory for Immunotherapy, who led the study, “Cancer cells have different sensitivities to the innate or adaptive response, so it important to target both in order to eradicate it. We have developed a special type of modified cell, called aAVC, which we found can do this.”

The aAVC cells are not taken from the subject’s own body but are foreign cells. The cells are modified by adding a natural killer t-cell ligand, which permits them to stimulate natural killer T-cells, along with an antigen associated with a cancer. The group found that when these cells are activated, they in turn promote the maturation of dendritic cells, which act as coordinators of the innate and acquired response. Dendritic cells are key because they allow the activation of immune memory, where the body remembers and responds to a threat even years later.

To find whether it worked in actual bodies, they conducted experiments in mice with a virulent form of melanoma that also expresses a model antigen called OVA. Tests in mice showed, moreover, that aggressive tumors could be shrunken by vaccinating the animals with aAVC cells that were programmed to display OVA antigen. Following the treatment, the tumors in the treated animals were smaller and necrotic in the interior—a sign that the tumor was being attacked by the killer CD8+T-cells.

Fujii continues, “We were interesting in finding a mechanism, and were able to understand that the aAVC treatment led to the development of blood vessels in the tumors that expressed a pair of important adhesion molecules, ICAM-1 and VCAM-1, that are not normally expressed in tumors. This allowed the killer CD8+T cells to penetrate into the tumor.”

They also found that in animals that had undergone the treatment, cancer cells injected even a year later were eliminated. “This indicates,” says Fujii, “that we have successfully created an immune memory that remembers the tumor and attacks it even later.”

Looking to the future, Fujii says, “Our therapy with aAVC is promising because typical immunotherapies have to be tailor-made with the patient’s own cells. In our case we use foreign cells, so they can be made with a stable quality. Because we found that our treatment can lead to the maturation of dendritic cells, immunotherapy can move to local treatment to more systemic treatment based on immune memory.”

aAVC are established using allogeneic cells (NIH3T3 or HEK293 cells for mice and humans, respectively) as vector cells by loading with NKT ligand, α-GalCerand co-electroporation with target Ag and CD1d mRNA. After culturing, they express target antigen in cytoplasm and CD1d/α-GalCercomplex on the cell surface. 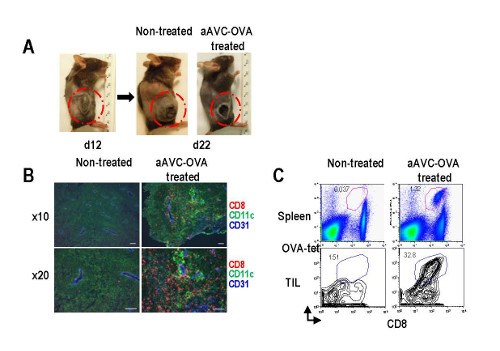 The antitumor effect and the mechanism of aAVC

A. C57BL/6 mice were injected with OVA expressing B16, MO4 cells s.c. and then treated with or without 5x105aAVC-OVA at day 12. Images are representative of pre (d12) and post aAVC-OVA treatment (d22) . B. The infiltration of CD8+T cells into the tumor was analyzed by immunohistochemistry (IHC). Scale bar, 100 μm. The closely-aggregated structures composed of CD11c+ DCs (green) and antigen-specific CD8+ T cells (red) around the vessels (blue) were seen in tumor sites. C. The frequency of Ag-specific CD8+T cells in the spleen and tumor (gating on CD45+CD3+) in the untreated or aAVC-OVA treated, tumor-bearing mice was analyzed using OVA-tetramer. the frequency of OVA-specific CD8+ T cells in the tumor was higher than in the spleen (30% vs 7% respectively) in aAVC-OVA treated mice.