Today, supercomputer-based weather predictions are typically done with simulations that use grids spaced at least one kilometer apart, and incorporate new observational data every hour. However, due to the roughness of the calculations, these simulations cannot accurately predict the threat of torrential rains, which can develop within minutes when cumulonimbus clouds suddenly develop. Now, an international team led by Takemasa Miyoshi of the RIKEN Advanced Center for Computational Science (AICS) has used the powerful K computer and advanced radar observational data to accurately predict the occurrence of torrential rains in localized areas.

The key to the current work, to be published later this month in the August issue of the Bulletin of the American Meteorological Society, is “big data assimilation” using computational power to synchronize data between large-scale computer simulations and observational data.

Using the K computer, the researchers carried out 100 parallel simulations of a convective weather system, using the nonhydrostatic mesoscale model used by the Japan Meteorological Agency, but with 100-meter grid spacing rather than the typical 2-kilometer or 5-kilometer spacing, and assimilated data from a next-generation phased array weather radar, which was launched in the summer of 2012 by the National Institute of Information and Communications Technology (NICT) and Osaka University. With this, they produced a high-resolution three-dimensional distribution map of rain every 30 seconds, 120 times more rapidly than the typical hourly updated systems operated at the world’s weather prediction centers today.

To test the accuracy of the system, the researchers attempted to model a real case—a sudden storm that took place on July 13, 2013 in Kyoto, close enough to Osaka that it was caught by the radars at Osaka University. The simulations were run starting at 15:00 Japanese time, and were tested as pure simulations without observational data input as well as with the incorporation of data every 30 seconds, on 100-meter and 1-kilometer grid scales. The simulation alone was unable to replicate the rain, while the incorporation of observational data allowed the computer to represent the actual storm. In particular, the simulation done with 100-meter grids led to a very accurate replication of the storm compared to actual observations.

According to Miyoshi, “Supercomputers are becoming more and more powerful, and are allowing us to incorporate ever more advanced data into simulations. Our study shows that in the future, it will be possible to use weather forecasting to predict severe local weather phenomena such as torrential rains, a growing problem which can cause enormous damage and cost lives.” 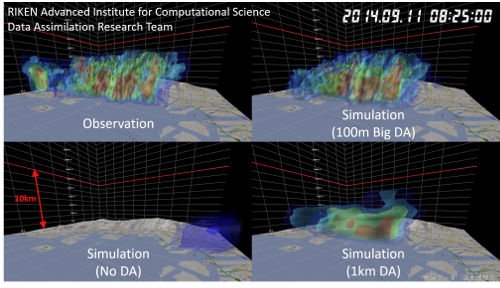 Distribution of thunderclouds on September 11, 2014