By examining the atomic carbon line from two young star systems—49 Ceti and Beta Pictoris—researchers had found atomic carbon in the disk, the first time this observation has been made at sub-millimeter wavelength, hinting that the gas in debris disks is not primordial, but rather is generated from some process of collisions taking place in the debris disk.

In search of a solution to this problem, a team from the RIKEN Star and Planet Formation Laboratory decided to look at emissions of carbon, which are important as they can provide clues to the origin of the gas. Normally, carbon will exist mostly in a molecular form, as carbon monoxide. Ultraviolet light from the central star will “dissociate” the atoms, creating free atomic carbon, but normally a chemical reaction—mediated by hydrogen—recombines the carbon into CO. However, if there is no hydrogen, then the reaction does not take place and the carbon remains in its atomic state.

Aya Higuchi, the first author of the paper, published in Astrophysical Journal Letters, was able to use the ten-meter Atacama Submillimeter Telescope Experiment (ASTE) in Chile to examine the atomic carbon line from two young star systems—49 Ceti and Beta Pictoris—that are known to have debris disks. They then compared this from data on CO taken by the Atacama Large Millimeter/submillimeter Array (ALMA), an array of telescopes in the same facility. “We were surprised,” she says, “to find atomic carbon in the disk, the first time this observation has been made at sub-millimeter wavelength. But more so, we were surprised at how much there was. It was about as common as the carbon monoxide.”

The implication, at least for these two star systems, is that there is very little hydrogen to drive the carbon back into CO. Because hydrogen makes up most of the gas in protoplanetary clouds, this hints that the gas is not primordial, but rather is generated from some process taking place in the debris disk. Gas has been found in other debris disks, but is not found in all. Higuchi says, “If we can perform similar measurements on other young stars, it will help to clarify the origin of the gas in debris disk. Our data here suggests that the gas is secondary.”

Looking to the future, she continues, “This work will also help to understand how a protoplanetary disk evolves into a debris disks by distinguishing the origin of the gas in the disks.”Many young stars, as well as more middle-aged stars like our sun, have “debris disks”—like the Oort Cloud in our own solar system—that are believed to be remnants of the system’s formation. Recently, radio observations have detected gas within a number of such discs, but it was not clear why the gas was there. There are two major hypotheses: either the gas is primordial gas from the original gas cloud that formed the star, or it originates from collisions between objects in the disk.

The work was done in collaboration with scientists from Ibaraki University and Nagoya University. 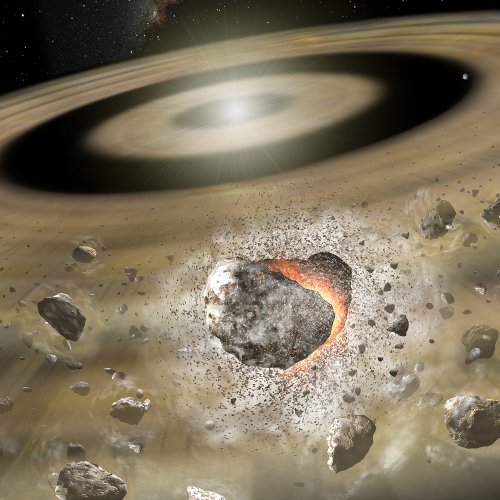