Radioactive elements in Cassiopeia A suggest a neutrino-driven explosion

Stars exploding as supernovae are the main sources of heavy chemical elements in the Universe. In particular, radioactive atomic nuclei are synthesized in the hot, innermost regions during the explosion and can thus serve as probes of the unobservable physical processes that initiate the blast. Using elaborate computer simulations, a team of researchers from RIKEN in Japan and the Max Planck Institute for Astrophysics (MPA) were able to explain the recently measured spatial distributions of radioactive titanium and nickel in Cassiopeia A, a roughly 340 year old gas remnant of a nearby supernova. The computer models yield strong support for the theoretical idea that such stellar death events can be initiated and powered by neutrinos escaping from the neutron star left behind at the origin of the explosion. The work was published in The Astrophysical Journal.

Massive stars end their lives in gigantic explosions, so-called supernovae. Within millions of years of stable evolution, these stars have built up a central core composed of mostly iron. When the core reaches about 1.5 times the mass of the Sun, it collapses under the influence of its own gravity and forms a neutron star. Enormous amounts of energy are released in this catastrophic event, mostly by the emission of neutrinos. These nearly massless elementary particles are abundantly produced in the interior of the new-born neutron star, where the density is higher than in atomic nuclei and the temperature can reach 500 billion degrees Kelvin.

The physical processes that trigger and drive the explosion have been an unsolved puzzle for more than 50 years. One of the theoretical mechanisms proposed invokes the neutrinos, because they carry away more than hundred times the energy needed for a typical supernova. Leaking out from the hot interior of the neutron star, a small fraction of the neutrinos are absorbed in the surrounding gas. This heating causes violent motions of the gas, similar to those in a pot of boiling water on a stove. When the bubbling of the gas becomes sufficiently powerful, the supernova explosion sets in as if the lid of the pot were blown off. The outer layers of the dying star are expelled into circumstellar space, and with them all the chemical elements that the star has assembled by nuclear burning during its life. But also new elements are created in the hot ejecta of the explosion, among them radioactive species such as 44Ti (titanium with 22 protons and 22 neutrons in its atomic nuclei) and 56Ni (28/28 neutrons/protons), which decay to stable calcium and iron, respectively. The thus released radioactive energy makes a supernova shine bright for years.

Because of the wild boiling of the neutrino-heated gas, the blast wave starts out nonspherically and imprints a large-scale asymmetry on the ejected stellar matter and the supernova as a whole (Fig. 1), in agreement with the observation of clumpiness and asymmetries in many supernovae and their gaseous remnants. The initial asymmetry of the explosion has two immediate consequences. On the one hand, the neutron star receives a recoil momentum opposite to the direction of the stronger explosion, where the supernova gas is expelled with more violence. This effect is similar to the kick a rowing boat receives when a passenger jumps off. On the other hand, the production of heavy elements from silicon to iron, in particular also of 44Ti and 56Ni, is more efficient in directions where the explosion is stronger and where more matter is heated to high temperatures. "We have predicted both effects some years ago by our three-dimensional (3D) simulations of neutrino-driven supernova explosions", says Annop Wongwathanarat, researcher at the RIKEN Astrophysical Big Bang Laboratory and lead author of the corresponding publication of 2013, at which time he worked at MPA in collaboration with his co-authors H.-Thomas Janka and Ewald Müller. "The asymmetry of the radioactive ejecta is more pronounced the larger the neutron star kick is", he adds. Since the radioactive atomic nuclei are synthesized in the innermost regions of the supernova, in the very close vicinity of the neutron star, their spatial distribution reflects explosion asymmetries most directly.

New observations of Cassiopeia A (Cas A), the gaseous remnant of a supernova whose light reached the Earth around the year 1680, could meanwhile confirm this theoretical prediction. Because of its young age and relative proximity at a distance of just 11,000 light years, Cas A offers two great advantages for the measurements. First, the radioactive decay of 44Ti is still an efficient energy source, and the presence of this atomic nucleus can therefore be mapped in 3D with high precision in the whole remnant by detecting the high-energy X-ray radiation from the radioactive decays. Second, also the velocity of the neutron star is known with its magnitude and its direction on the plane of the sky.

Since the neutron star propagates with an estimated speed of at least 350 kilometers per second, the asymmetry in the spatial distribution of the radioactive elements is expected to be very pronounced. Exactly this is seen in the observations (Fig. 2, left panel). While the compact remnant speeds toward the lower hemisphere, the biggest and brightest clumps with most of the 44Ti are found in the upper half of the gas remnant. The computer simulation, viewed from a suitably chosen direction, exhibits a striking similarity to the observational image (Fig. 2, right panel). But not only the spatial distributions of titanium and iron resemble those in Cas A (for a 3D visualization, see the 3D imaging of Cas A available at the weblink Smithsonian 3D webpage). Also the total amounts of these elements, their expansion velocities, and the velocity of the neutron star are in amazing agreement with those of Cas A. "This ability to reproduce basic properties of the observations impressively confirms that Cas A may be the remnant of a neutrino-driven supernova with its violent gas motions around the nascent neutron star", concludes H.-Thomas Janka.

But more work is needed to finally prove that the explosions of massive stars are powered by energy input from neutrinos. "Cas A is an object of so much interest and importance that we must also understand the spatial distributions of other chemical species such as silicon, argon, and neon", remarks Ewald Müller, pointing to the beautiful multi-component morphology of Cas A revealed by 3D imaging (see Smithsonian 3D webpage). One example is also not enough for making a fully convincing case. Therefore the team has joined a bigger collaboration to test the theoretical predictions for neutrino-driven explosions by a close analysis of a larger sample of young supernova remnants. Step by step the researchers thus hope to collect evidence that is able to settle the long-standing problem of the supernova mechanism.

This project was partly funded by the European Research Council through grant ERC-AdG No. 341157-COCO2CASA, by the Deutsche Forschungsgemeinschaft through Excellence Cluster EXC-153 "Universe", and by a RIKEN iTHES Project. The simulations and their postprocessing were conducted on the IBM iDataPlex Systems draco and hydra of the Max Planck Computing and Data Facility (MPCDF).

Simulation of a supernova blast wave

Time evolution of the radioactive 56Ni in the ejecta of a 3D simulation of a neutrino-driven supernova explosion. The images show the nonspherical distribution from shortly after the onset of the explosion (3.25 seconds) until a late time (6236 seconds) when the final asymmetry is determined. The colors represent radial velocities according to the scales given for each panel. 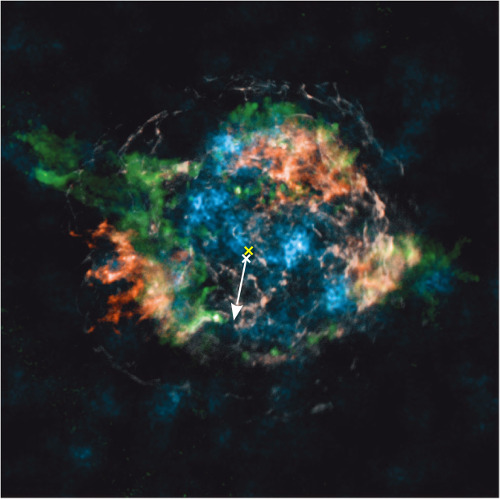 Observed distribution of 44Ti (blue) and iron (white, red) in Cassiopeia A

The visible iron is mostly the radioactive decay product of 56Ni. The yellow cross marks the geometrical center of the explosion, the white cross and the arrow indicate the current location and the direction of motion of the neutron star. (Copyright: Macmillan Publishers Ltd: Nature; from Grefenstette et al., Nature 506, 339 (2014); Fe distribution courtesy of U.~Hwang.) 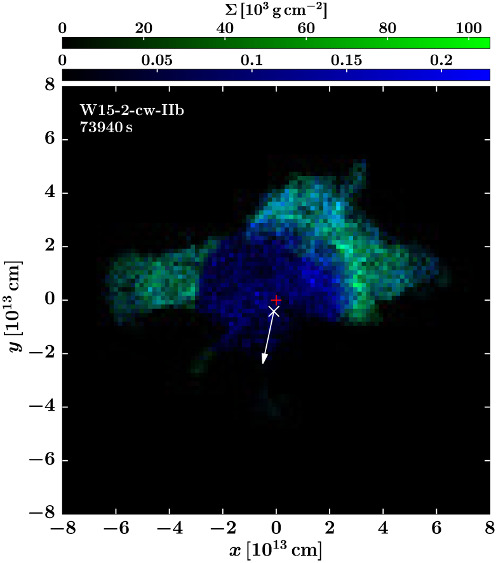 Observable 56Ni (green) and 44Ti (blue) as predicted by the 3D simulation of a neutrino-driven supernova explosion shown in Figs. 1a,b,c

The orientation is optimized for closest possible similarity to the Cas A image of Fig. 2a. The neutron star is marked by a white cross and shifted away from the center of the explosion (red plus symbol) because of its kick velocity. The neutron star motion points away from the hemisphere that contains most of the ejected 44Ti. Iron can be observed only in an outer, hot shell of Cas A and is therefore displayed only exterior to a central, cool sphere, inside of which it remains invisible.