Scientists from the RIKEN Center for Integrative Medical Sciences in Japan and collaborators have found that T cells—immune cells that help to protect the body from infections and cancer—change the body’s metabolism when they are activated, and that this activation actually leads to changes in behavior.

It is currently known that individual T cells change their metabolism to meet their energy needs after being activated, but the systemic metabolic effect of sustained activation of the immune system has remained unexplored. To understand the systemic effects, the group looked at T cell activation in mice designed to lack a surface receptor called PD-1, which is necessary for inhibiting the activity of T cells. T cells remain activated in mice without the receptor, similar to those in the immune systems of people with certain types of autoimmune disease. In these mice, they found that amino acids—molecules that are used to build proteins—were depleted in the blood, and that they were increased in the T cells themselves, implicating the T cells in the change.

The remaining question was whether this depletion of amino acids was actually having any systemic effect. By analyzing the biochemistry of the brain, they found that the systemic decrease in the amino acids tryptophan and tyrosine in blood led to lower amounts available in the brain, limiting production of the neurotransmitters serotonin and dopamine. These neurotransmitters affect emotions, motivation and fear—for example, serotonin is often a target of drugs that combat depression. The researchers found that their depletion in mice without PD-1 resulted in behavioral changes dominated by anxiety and exacerbated fear responses, which could be remedied by providing a diet rich in an essential amino acid. This research, which was published in Nature Immunology, required teamwork and collaboration to link diverse fields of biology: immunology, neuroscience and behavior, using cutting edge metabolite measurements and imaging methods. “Together these data indicate that excessive activation of T cells causes a systemic metabolomic shift with consequences that extend beyond the immune system” says Michio Miyajima, one of the four first co-authors of this study.

According to Sidonia Fagarasan, the leader of the group, “We were fascinated to see that this happens-as it revealed the power of the immune system to influence many aspects of the body’s physiology besides infection and immunity. It will be interesting in the future to investigate whether the trigger of fear and anxiety by T cell activation is merely a side effect of the process, or whether there is an evolutionary benefit of this adaptation. We would also like to further investigate these changes, as the blockade of PD-1 is being investigated as an anti-cancer therapy, and it is important to understand if this could have behavioral changes such as increases in anxiety.”

This research was supported by the Japan Agency for Medical Research and Development–Core Research for Evolutional Science and Technology (14532135 to S.F.), Japan Agency for Medical Research and Development (145208 and 16770835 to T.H.) and the Cell Science Foundation (K.C). The work was done by RIKEN in collaboration with Keio University, Kyoto University, and other institutions. 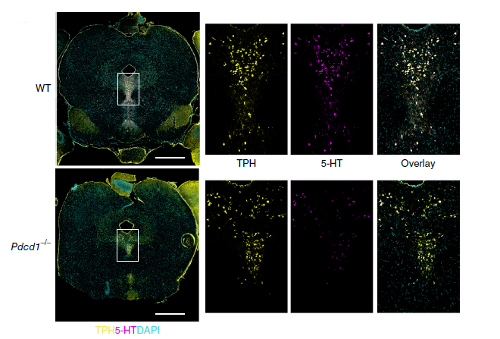