Determining the optimal binding energies for heterogeneous chemical reactions—usually meaning that the reactant is in the gas or liquid phase while the catalyst is a solid—is critical for many aspects of modern society, as we rely on such reactions for processes as diverse as the production of fertilizers and plastics. There is an optimal binding energy—meaning the degree of interaction between the reactants and the catalyst—where the process is most efficient (if it is too low, the reactants will not react with the catalyst, and if it is too high they will remain bound to it), and catalysts are designed based on this. Now, in a discovery that could lead to the development of novel catalysts that do not rely on expensive rare metals, scientists from the RIKEN Center for Sustainable Resource Science have shown that the optimal binding energy can deviate from traditional calculations, which are based on equilibrium thermodynamics, at high reaction rates. This means that reconsidering the design of catalysts using the new calculations may be necessary to achieve the best rates.

Heterogeneous chemical reactions are used in many industrial processes. Some of the best known are the production of ammonia via the Haber-Bosch process, the production of plastics using the Ziegler-Natta reaction, and the desulfurization of petroleum. In 1911, the French chemist Paul Sabatier proposed, based on experiments, that there is an optimum binding energy which allows the catalytic activity to be maximized. Recently, advances in computational chemistry have provided a framework with which to calculate the optimal binding energy, based on equilibrium thermodynamics and assuming that the process will proceed smoothly if all steps in the process are thermodynamically favorable. Here, the role of the catalyst is to improve the thermodynamics of the most unfavorable step. The catch is that “optimum” is usually understood as meaning that the reaction requires as little driving force as possible, so that it is thermodynamically efficient, but in the real world it is often more practical to have a higher rate of catalysis, even if a larger driving force is necessary.

The team performed a new set of calculations, based on reaction kinetic modeling, that take this discrepancy into account, and calculated new optimal binding energies for hydrogen oxidation, which uses heterogeneous catalysis, finding that the calculations gave different values at high reaction rates. “We were happy to see,” says Hideshi Ooka, the first author of the study, “that our calculations predict new strategies of catalyst design which could not have been obtained using the traditional, thermodynamic approach.”

According to Ryuhei Nakamura, head of the Center for Sustainable Resource Center’s Biofunctional Catalyst Research Team, “Based on this finding, we plan to look for new catalysts, using elements such as copper or nickel, that can push heterogeneous catalytic reactions forward but are less costly and more environmentally friendly than the current ones, which often require precious metals such as platinum and palladium.”

He continues, “Consequently, research to find new catalysts using our method could contribute to reaching three of the United Nations Sustainable Development Goals: Goal 7 (affordable and clean energy), Goal 12 (responsible production and consumption), and Goal 13 (climate action).” The research was published in The Journal of Physical Chemistry Letters. 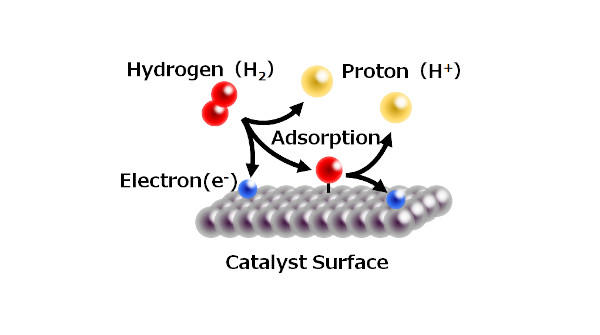 Schema of the hydrogen oxidation reaction used in the current experiment