For scientists searching for the brain’s ‘control room’, an area called the claustrum has emerged as a compelling candidate. This little-studied deep brain structure is thought to be the place where multiple senses are brought together, attention is controlled, and consciousness arises. Observations in mice now support the role of the claustrum as a hub for coordinating activity across the brain. New research from the RIKEN Center for Brain Science (CBS) shows that slow-wave brain activity, a characteristic of sleep and resting states, is controlled by the claustrum. The synchronization of silent and active states across large parts of the brain by these slow waves could contribute to consciousness.

A serendipitous discovery actually led Yoshihiro Yoshihara, team leader at CBS, to investigate the claustrum. His lab normally studies the sense of smell and the detection of pheromones, but they chanced upon a genetically engineered mouse strain with a specific population of brain cells that was present only in the claustrum. These neurons could be turned on using optogenetic technology or selectively silenced through genetic manipulation, thus enabling the study of what turned out to be a vast, claustrum-controlled network. The study by Yoshihara and colleagues was published in Nature Neuroscience on May 11.

They started out by mapping the claustrum’s inputs and outputs and found that many higher-order brain areas send connections to the claustrum, such as those involved in sensation and motor control. Outgoing connections from the claustrum were broadly distributed across the brain, reaching numerous brain areas such as prefrontal, orbital, cingulate, motor, insular, and entorhinal cortices. “The claustrum is at the center of a widespread brain network, covering areas that are involved in cognitive processing,” says co-first author Kimiya Narikiyo. “It essentially reaches all higher brain areas andall types of neurons, making it a potential orchestrator of brain-wide activity.”

Indeed, this is what the researchers found when they manipulated claustrum neurons optogenetically. Neural firing in the claustrum closely correlated with the slow-wave activity in many brain regions that receive input from the claustrum. When they artificially activated the claustrum by optogenetic light stimulation, it silenced brain activity across the cortex—a phenomenon known as a “Down state”, which can be seen when mice are asleep or at rest. Up and Down states are known to be synchronized across the cortex by slow waves of activity that travel from the front of the brain to the back. “The slow wave is especially important during sleep because it promotes homeostasis of synapses across the brain and consolidates memories from the preceding awake period,” comments Yoshihara.

The claustrum turns out to be vital for generating this slow-wave activity. Genetically removing the claustrum neurons significantly reduced slow waves in the frontal cortex. “We think the claustrum plays a pivotal role in triggering the down states during slow-wave activity, through its widespread inputs to many cortical areas,” says Yoshihara. When these areas subsequently enter an up state and fire synchronously, this serves to ‘replay’ memories, transfer information between areas, and consolidate long-term memories, “all functions that may contribute indirectly to a conscious state,” Yoshihara observes. “The claustrum is a coordinator of global slow-wave activity, and it is so exciting that we are getting closer to linking specific brain connections and actions with the ultimate puzzle of consciousness.” 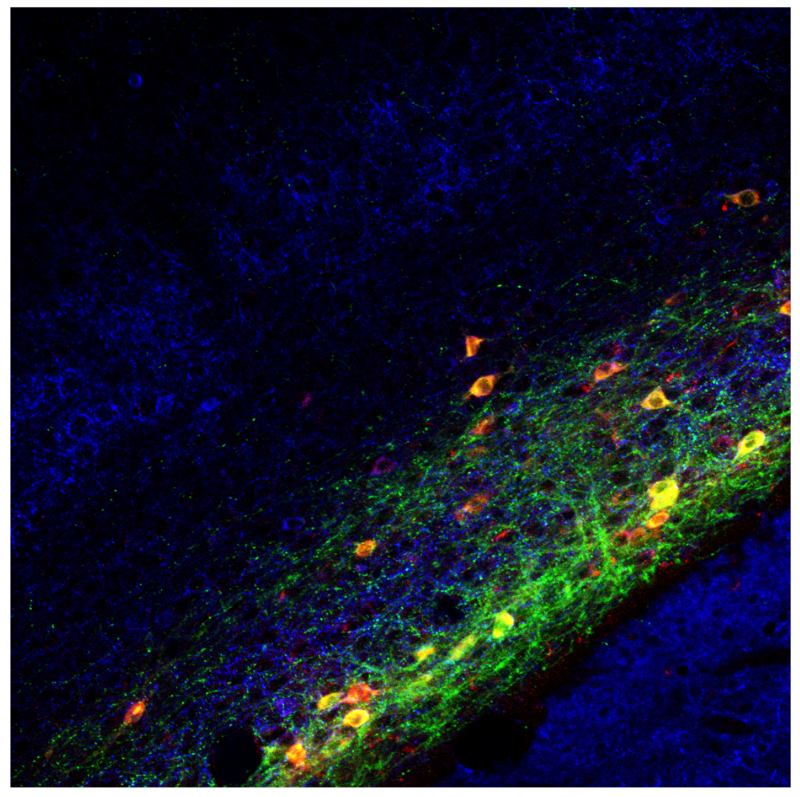 Claustrum neurons are labeled with synaptophysin-GFB (pre-synapses shown in green) and WGA (trans-synapse area in red). All neuronal cell bodies and dendrites are stained with anti-MAP2 (blue).