A single proton can make a heck of a difference

Scientists from the RIKEN Nishina Center for Accelerator-Based Science and collaborators have shown that knocking out a single proton from a fluorine nucleus—transforming it into a neutron-rich isotope of oxygen—can have a major effect on the state of the nucleus. This work could help to explain a phenomenon known as the oxygen neutron dripline anomaly.

The neutron drip-line is a point where adding a single neutron to a nucleus will lead to it immediately drip a neutron, and this sets a limit on how neutron rich a nucleus can be. This is important for understanding neutron rich environments as supernovae and neutron stars, since nuclei at the dripline will often undergo beta-decay, where a proton is converted into a neutron, driving it up the periodic table.

What was poorly understood is why the dripline for oxygen, with 8 protons, is 16 neutrons, while that of fluorine, with just one extra proton, is 22 neutrons, a much larger number. To try to understand why, the research group used the RI Beam Factory, operated by RIKEN and the University of Tokyo, to create an exotic nucleus, fluorine 25, which has 9 protons and 16 neutrons. The 16 neutrons and 8 of the protons form a complete shell, making it a “doubly magic” nucleus that is especially stable, and the one extra proton—known as a “valence proton”—exists outside that core. The beam was then collided with a target to knock out the proton, leaving oxygen 24, and the SHARAQ spectrometer was used to analyze the resulting nucleus.

The researchers analyzed what is known as the “spectroscopic factor,” which is used to gauge the effects of interactions among nucleons in a nucleus on individual particles.

Conventional wisdom would be that knocking out the protons would leave the core—oxygen 24—in the lowest energy state called the ground state. However, the experiment found that this was not true, and that the oxygen 24 at the core of the fluorine isotope mostly existed in excited states quite different from oxygen 24 itself.

According to Tsz Leung Tang, the main author of the study, published in Physical Review Letters, “This is quite an exciting result, and it tells us that the addition of a single valence proton to a nucleus core—a doubly magic one in this case—can have a significant effect on the state of the core. Calculations showed that known interactions, including tensor force effects, were insufficient to explain this result. We plan to conduct further experiments to determine the mechanism responsible for the extension of the dripline in fluorine.” 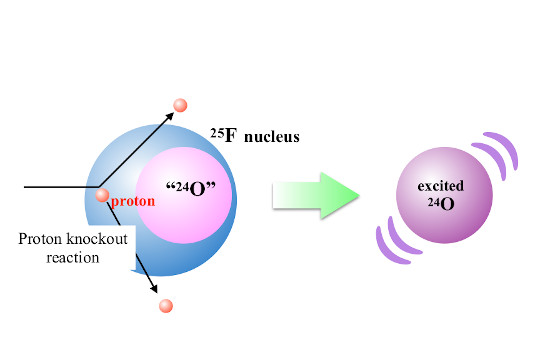 A schematic of the proton knockout reaction used in the experiment 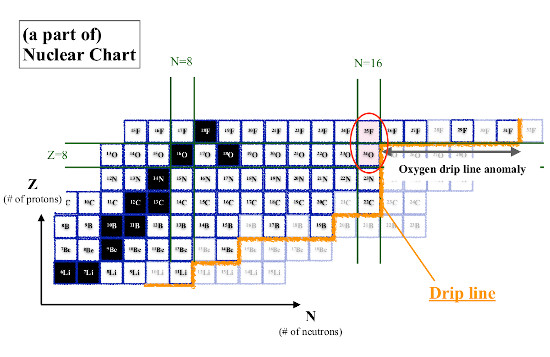 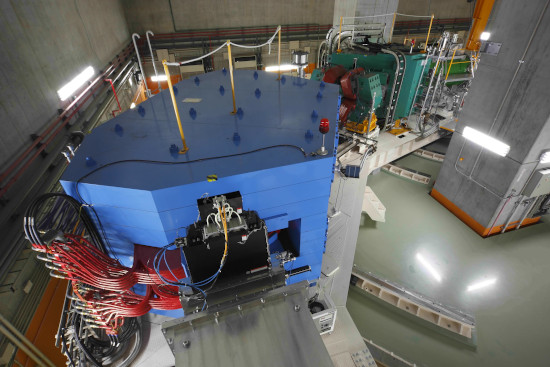 The SHARAQ detector at the RI Beam Factory