Blood cell mutations linked to leukemias are inevitable as we age

A new study by researchers at the RIKEN Center for Integrative Medical Science in Japan reports differences in blood cell mutations between Japanese and European populations. The study found that these pre-clinical mutations were strongly associated with different types of cancers and can explain why Europeans have higher rates of chronic lymphocytic leukemia, while Japanese have higher rates of T-cell leukemia. This study was published in Nature on June 24.

Our blood cells are continuously renewed from a stock of blood stem cells—called HSCs—located in bone marrow. These stem cells produce progenitor cells that give rise to the many different kinds of blood cells. Among these are important lymph cells that make up our immune system, such as T-cells and B-cells. Blood cells that come from the same stem cell or progenitor can be identified by looking at their DNA. For example, all T-cells derived from a particular HSC are clones of each other. If the HSC had a mutation, the same mutation will exist in all the T-cells in that lineage, but not in other T-cells that came from different HSCs.

Although these types of clonal mutations have been studied in European populations, Chikashi Terao and his team at RIKEN IMS suspected that they might find somewhat different results in their older Japanese population of almost 180,000 individuals. Their results showed that clonal mutations had occurred in over 35% of people in their 90s. Data from the UK BioBank yielded similar results, but the overall percentages were a bit lower. “Our findings strongly suggest that chromosomal alterations in hematopoietic clones is an inevitable event in the very old,” says Terao. “The higher percentage of mutations in the Japanese population is likely related to the greater average age of the sample.”

Nevertheless, more in-depth comparisons with the UK BioBank data revealed several differences. The team looked at all mutations in T-cell lineages and found that more than 80% of them occurred in the Japanese population. On the flip side, more than 90% of B-cell lineage mutations occurred in the European sample. These data are consistent with reported cases of leukemia. T-cell leukemia occurs 10 times more often in Japanese people than in Europeans, while chronic lymphocytic leukemia, a B-cell related leukemia, is 5 times more prevalent in Europeans. This does not mean that mutations selectively occurred in different genes depending on the population. Remember, the data only include clonal mutations that survived and replicated enough to be detectable. Terao explains, “We can infer that the advantage of a particular chromosomal mutation differs depending on the genetic and environmental context.”

The researchers also found genetic components related to the risk of having clonal HSC mutations. They identified several locations on chromosomes for which genetic variations were associated with increased risk of clonal blood mutations in general, as well three locations related to specific mutations in B-cells. This means that the likelihood or risk of having one of the critical mutations now or in the future can be estimated by looking for these variations in a person’s DNA.

Thus, although clonal HSC mutations might be inevitable, we can still do something about it. “Not everyone with these mutations gets cancer”, emphasizes Terao. “However, a simple blood test that you can get at any regular health checkup will be able to identify people at risk of leukemia by checking for clonal HSC mutations. A DNA test based on the blood sample can also identify those at high risk of developing the critical HSC mutations in the future.” 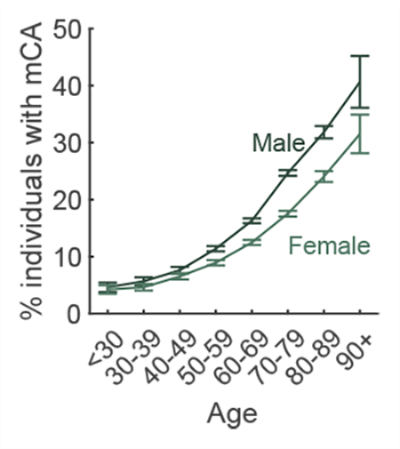 The chance of having a detectable mosaic chromosomal alteration (mCAs) in blood DNA increases with age
The percentages of people with an mCA plotted by age and sex. Over 30% of people that reach their mid 80s are at risk for these mutations that can lead to leukemias.