Spider silk made by photosynthetic bacteria

Spiders produce amazingly strong and lightweight threads called draglines that are made from silk proteins. Although they can be used to manufacture a number of useful materials, getting enough of the protein is difficult because only a small amount can be produced by each tiny spider. In a new study published in Communications Biology, a research team led by Keiji Numata at the RIKEN Center for Sustainable Resource Science (CSRS) reported that they succeeded in producing the spider silk using photosynthetic bacteria. This study could open a new era in which photosynthetic bio-factories stably output the bulk of spider silk.

In addition to being tough and lightweight, silks derived from arthropod species are biodegradable and biocompatible. In particular, spider silk is ultra-lightweight and is as tough as steel. “Spider silk has the potential to be used in the manufacture of high-performance and durable materials such as tear-resistant clothing, automobile parts, and aerospace components,” explains Choon Pin Foong, who conducted this study. “Its biocompatibility makes it safe for use in biomedical applications such as drug delivery systems, implant devices, and scaffolds for tissue engineering.” Because only a trace amount can be obtained from one spider, and because breeding large numbers of spiders is difficult, attempts have been made to produce artificial spider silk in a variety of species.

The CSRS team focused on the marine photosynthetic bacterium Rhodovulum sulfidophilum. This bacterium is ideal for establishing a sustainable bio-factory because it grows in seawater, requires carbon dioxide and nitrogen in the atmosphere, and uses solar energy, all of which are abundant and inexhaustible.

The researchers genetically engineered the bacterium to produce MaSp1 protein, the main component of the Nephila spider dragline which is thought to play an important role in the strength of the spider silk. Optimization of the gene sequence that they inserted into the bacterium’s genome was able to maximize the amount of silk that could be produced. They also found that a simple recipe — artificial seawater, bicarbonate salt, nitrogen gas, yeast extract, and irradiation with near-infrared light — allows R. sulfidophilum to grow well and produce the silk protein efficiently. Further observations confirmed that the surface and internal structures of the fibers produced in the bacteria were very similar to those produced naturally by spiders.

“Our current study shows the initial proof of concept for producing spider silk in photosynthetic bacteria. We are now working to mass produce spider-silk dragline proteins at higher molecular weights in our photosynthetic system,” Numata says. “The photosynthetic microbial cell factories, which produce bio-based and bio-degradable materials via a carbon neutral bioprocess, could help us in accomplishing some of the Sustainable Development Goals (SDGs) adopted by the United Nations such as Goal #12 ‘Responsible Production and Consumption, and Goal #13 ‘Climate Action’. Our results will help provide feasible solutions for energy, water and food crises, solid waste problems, and global warming.” 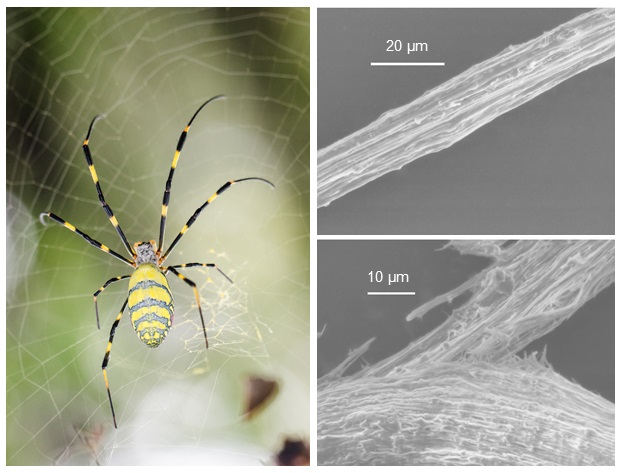