Scientists develop principles for the creation of an “acoustic diode"

In research published in Science Advances, a group led by scientists from the RIKEN Center for Emergent Matter Science (CEMS) have used a principle, “magneto-rotation coupling,” to suppress the transmission of sound waves on the surface of a film in one direction while allowing them to travel in the other. This could lead to the development of “acoustic rectifiers”—devices that allow waves to propagate preferentially in one direction, with potential applications in communications technology.

Devices known as “rectifiers,” are extremely important for our technological civilization. The best known are electronic diodes, which are used to convert AC into DC electricity, essentially making electrification possible.

In the current study, the group examined the movement of acoustic surface waves—movements of sound like the propagation of earthquakes over the surface of the earth—in a magnetic film. It is known that there is a interplay between the surface acoustic waves and “spin waves”—disturbances in magnetic fields within the material that can move through the material.

Acoustic surface waves can excite spin waves in two different ways. One, magneto-elastic coupling, is very well documented. However, a second, magneto-rotation coupling, was proposed more than forty years ago by Sadamichi Maekawa, one of the authors of the current study, but was not experimentally verified until now.

According to Mingran Xu of RIKEN CEMS, the first author of the paper, “It was very exciting to show that the phenomenon of magneto-rotation coupling actually takes place, and that it can be used to completely suppress the movement of acoustic energy in one direction.”

Jorge Puebla, also of RIKEN CEMS, says, “We hope that we can use this work to create an “acoustic diode” equivalent to the electronic diodes that are so important. We could relatively easily make a device where the acoustic energy is efficiently transfer in one direction but blocked in the other. This is happening at microwave frequencies, which is the range of interest for 5G communication technology, so surface acoustic waves may be an interesting candidate for this technology.” 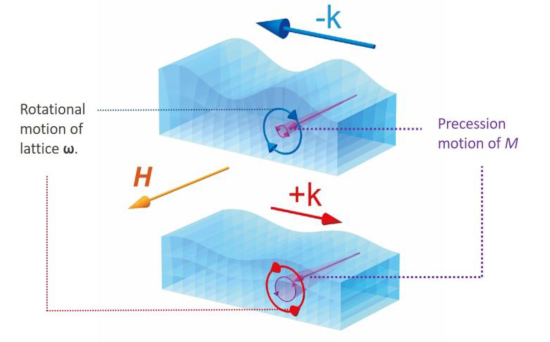 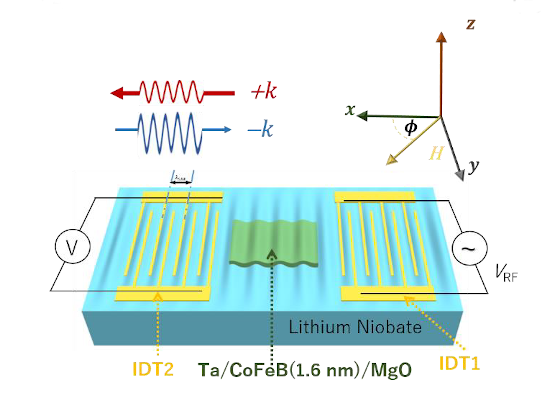