Parasitic plants attack crops when defending themselves from microbes

Researchers at the RIKEN Center for Sustainable Resource Science (CSRS) in Japan have discovered a link between defensive responses in plants and the beautiful but devastating crop parasite witchweed. Published in Nature, the new study shows that both parasitic and non-parasitic plants can detect and react to a class of organic compounds called quinones. While parasitic plants sense quinones in their prey and use it to invade, quinones trigger defensive responses in non-parasitic plants that can protect them from bacteria and other microbes.

DMBQ-Triggered Response
Calcium imaging of a wildtype Arabidopsisroot in response to exposure to the quinone DMBQ.

All varieties of the witchweed parasite (genus Striga ) sense the quinone DMBQ in other plants such as maize, sugarcane, and sorghum, and then build appendage-like organs that they use to invade the host. Once they invade, they steal water and nutrients, affecting crop growth and production. Annual worldwide losses to Striga parasites are well over a billion USD. Ken Shirasu and his group at CSRS want to find ways to prevent these kinds of losses by developing effective treatments or Striga-resistant crops. To do this, they need to understand all the molecular events that happen in the parasitic plants in response to quinones. But first says Shirasu, “we needed to answer a more basic question: What are quinones doing in non-parasitic plants in the first place?” Surprisingly, no one had ever tested whether non-parasitic plants respond to quinones. The answer is that they do.

The researchers found that the commonly used research plant Arabidopsis responded to quinones by producing a calcium signal. They then examined 50,000 mutagenized seedlings and found 11 mutants in which this response was absent. This is a common technique used to find genes responsible for biological chains of events. In this case, all 11 mutants showed mutations in the same gene, which the researchers named CARD1 (CAnnot Respond to DMBQ).

Next, the researchers asked what happens after a non-parasitic plant detects DMBQ. A genetic analysis showed that biological chain of events after quinones activate the CARD1 protein involve responses to wounds and stress. The team then tested the hypothesis that quinone signaling is related to immune responses. They found that compared with wildtype plants, the card1 mutants were more easily infected by the Pseudomonas syringae bacteria—a common bacteria that affects Arabidopsis and many other plants such as tomatoes. One typical immune response in plants is the closing of pores in the leaves to prevent pathogens from entering. A deeper analysis showed that these stomatal pores failed to close in the mutant plants because the plants could not respond to quinones. This likely led to the increased susceptibility to infection. Another test showed that pre-treating plants with DMBQ increased resistance to bacterial infection via the CARD1 signaling pathway.

Satisfied that the CARD1 protein is essential for immune-related responses to quinones in non-parasitic plants, the team wondered if quinone signaling in parasitic plants was related to a similar gene. They looked for and found CARD1-like proteins in the model parasitic plant Phtheirospermum japonicum, which were expressed in the roots and also involved in DMBQ-induced calcium increase.

Understanding plant quinone signaling should provide targets for combatting parasitic plants, as well as rule out other targets. As Shirasu explains, “our current research shows that if we simply target quinones, it will likely have the unwanted side effect of making crops more susceptible to bacterial infection. Another approach could be to create crops that do not produce quinones, but can still initiate the downstream responses that provide protection from microbial infection, perhaps with treatment.”

One of the next steps is to figure out how exactly quinone production is triggered in non-parasitic plants, and if the chain of events can be initiated downstream when quinones are missing. 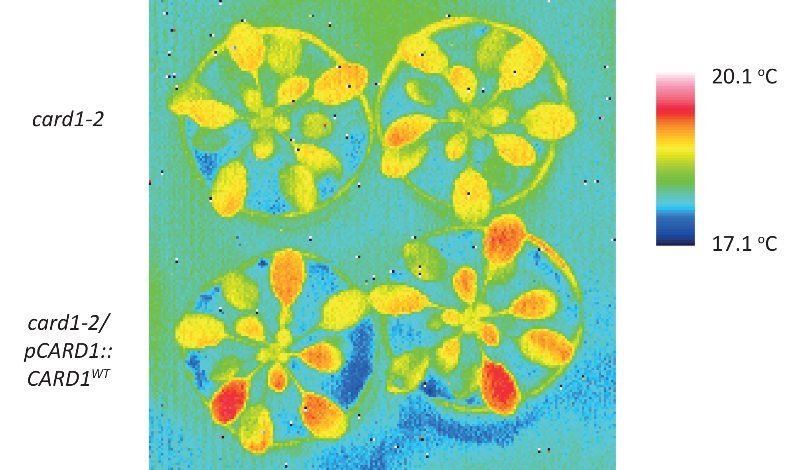