Melatonin in mice: there’s more to this hormone than sleep

Researchers at the RIKEN Center for Brain Science and the RIKEN BioResource Research Center in Japan, along with collaborators at the State University of New York at Buffalo, have created a mouse model that allows the study of naturally occurring melatonin. Published in the Journal of Pineal Research, these first experiments using the new mice showed that natural melatonin was linked to a pre-hibernation state that allows mice to slow down their metabolism and survive when food is scarce, or temperatures are cold.

Melatonin is called “the hormone of darkness” because it’s released by the brain in the dark, which usually means at night. It tells the body when it’s dark outside so that the body can switch to ‘night mode’. Although other hormones are easily studied in the laboratory, it has been difficult to study how the body reacts to melatonin because laboratory mice don’t actually have any. To solve this problem, the researchers crossed laboratory mice with wild mice—which do produce melatonin—and bred new lab mice that can produce melatonin innately. This was a lot harder than it sounds and took over 10 mouse generations.

Once they had melatonin-producing lab mice, the researchers were able to study how the hormone affects entrainment—the alignment of the body clock with the outside world. Mice like to run on wheels regularly, and researchers can use this to measure entrainment after suddenly changing the light/dark cycle, which mimics sudden changes in times zones. Compared with regular lab mice, the mice with innate melatonin adapted their wheel running times faster to darkness starting six hours earlier, similar to ‘east-bound jet lag’.

The researchers were also able to resolve a debate about whether life span is affected by melatonin, which has been hard to study because of the missing melatonin in lab mice. "Now we finally have an answer: endogenous melatonin has no life-extending effects,” says Takaoki Kasahara, a senior author of the new study.

Despite many similarities, mice with innate melatonin differed from regular lab mice in several ways. The regular lab mice were heavier, had bigger reproductive organs, and were more successful at mating, producing more pups. On the other hand, melatonin-producing female mice were able to enter a state called daily torpor, a kind of low-power mode similar to hibernation that can last for a few hours a day. Daily torpor is a way for mice to deal with food scarcity and cold temperatures by conserving energy.

“There is an evolutionary advantage to producing melatonin, because it protects wild mice from losing weight when they can’t find enough food. Lab mice, however, are typically given unlimited food and live in warm cages,” Kasahara observes. “Our finding that mice lacking melatonin are more successful at reproducing can explain why lab mice lack melatonin. Over the years, by selecting for mice that reproduce the most pups, we might have also been inadvertently selecting for mice with lower and lower levels of melatonin.”

Having shown that melatonin can affect circadian rhythms, the specially bred melatonin-proficient mice will be valuable for studying the detailed molecular and neural mechanisms of melatonin signaling on the circadian clock and sleep, as well as the effects of melatonin on immunity and bone formation. These relationships have been suggested, but have not yet been closely examined.

Further research on melatonin’s relationship with daily torpor and hibernation is also important. Melatonin is necessary for seasonal reproduction in several animals, signaling the length of the night, which indicates the season. "This research could very well lead to a better understanding of seasonal affective disorder, or winter depression, in humans,” says Kasahara. “Indeed, one of the newest antidepressants, agomelatin, activates melatonin receptors.” 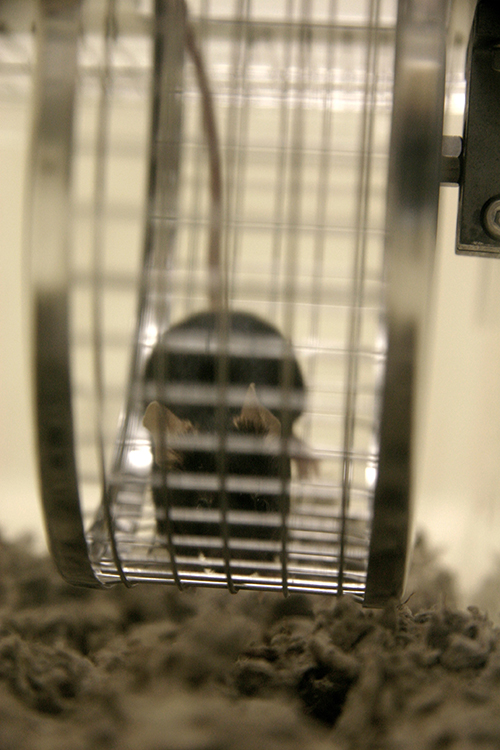 A new lab mouse that naturally produces melatonin.
These mice were better able to adapt their daily activity rhythms after their light/dark cycles were suddenly offset by 6 hours.