You may be surprised to know that 40 trillion important bacteria live in our intestines. They help keep us healthy by producing essential nutrients and eliminating foreign pathogens. On the other hand, these commensal bacteria can harm your health if they are out of control. Therefore, understanding the way the body regulates the balance of intestinal bacteria is important issue for staying healthy.

Immunoglobulin A (IgA) is the most abundant antibody produced in the human body, mostly secreted from the mucosal surfaces of the intestinal tract. IgA is thought to regulate the growth, colonization, and function of intestinal bacteria by binding to them. However, until now, we didn’t know what could trigger IgA responses to bacteria in a dynamically changing intestinal environment.

Intestinal bacteria help us break down what we eat into smaller pieces called metabolites. Recent studies suggest that these metabolites have a significant impact on immune function in the intestinal tract. In particular, short-chain fatty acids (SCFAs), a major metabolite of intestinal bacteria, are known to be involved in creating and regulating immune-cell function. They are thought to increase IgA production, but until now, nobody knew what could trigger this behavior.

A research group led by Hiroshi Ohno at RIKEN IMS fed mice food that can specifically increase SCFAs locally in the large intestine. Analysis of the mice showed that acetate, a type of SCFA, increases both the number of IgA-producing cells and the amount of IgA, and also regulates how much IgA is bound to each intestinal bacterium. “SCFAs including acetate are easily absorbed in the stomach and proximal small intestine, so it was difficult to investigate the effects of orally administered SCFAs in the distal intestine such as the colon, where the intrinsic SCFA levels are high,” says Ohno. “Our collaborators have developed a method that can efficiently deliver the metabolites into the distal intestine, which enabled us to analyze the effects of SCFAs on the immune system there.” Other SCFAs, such as propionic acid or butyric acid did not affect IgA.

The researchers also found that the type of bacteria to which IgA binds depends on whether acetate is present or not. Normally, IgA binds mostly to common symbiotic bacteria, but in mice treated with acetate, it tended to bind to potentially harmful bacteria such as E. coli. More detailed analysis showed that when acetate leads to IgA production in the colon, the IgA binds to those potentially harmful bacteria and prevents them from settling in and invading the mucus layer.

These findings were somewhat unexpected. “At first we thought that acetate simply increases IgA equally against all commensal bacteria,” explains Ohno. “It was rather surprising to see that it preferentially enhances production of IgA against certain microbes through collaboration with other immune cells.” In fact, the experiments showed that acetate only increased IgA production when potentially harmful bacteria were present.

“Accumulating evidence suggests the involvement of gut microbiota in many human diseases. IgA is one of the most efficient ways to control the microbiota, and therefore we think our findings are a basis for this regulatory mechanism. Since the functions of metabolites remain largely unknown, we will keep focusing on host-microbe interactions through these small molecules to reveal how they affect human pathophysiology,” says Ohno. 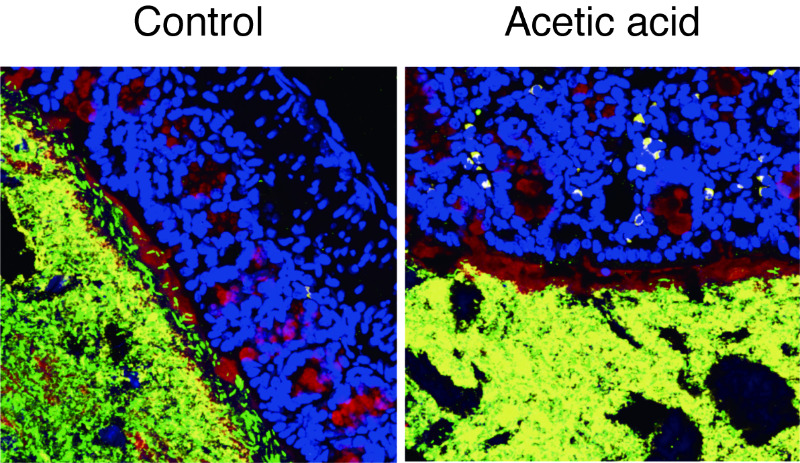