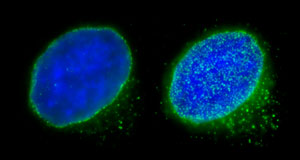 The molecular shuttles on which proteins hitch rides when passing in and out of the nuclei of human cells differ depending on those proteins’ biological functions, RIKEN researchers have revealed1. This discovery could eventually help scientists to develop new ways to treat cancer and other diseases.

Vast numbers of ions and molecules are shipped into and out of the nucleus of a cell, and this transfer affects every aspect of health. Ions and small molecules can easily slip through pores in the membrane that surrounds the nucleus (Fig. 1), whereas larger cargo such as proteins can do so only after binding to receptors that pass through the pores.

In human cells, 12 such receptors, called importins, are involved in nuclear import. Mutations of specific importin genes in model organisms, including yeast and flies, have been shown to cause problems in certain biological processes. But little is known about their precise molecular functions because the cargos associated with different importins are largely unknown.

Previously, a team led by Naoko Imamoto of RIKEN Cellular Dynamics Laboratory had developed a way to identify the cargos of nuclear import receptors. Called SILAC-Tp, this technique involves labeling cells with amino acids of different masses, extracting cell cytoplasms and nuclei, remixing these to trigger nuclear transport into the cell nuclei in a reconstituted system, and identifying cargo proteins with mass spectrometry.

Now, by using a recent advance in mass spectrometry, Imamoto’s team improved the SILAC-Tp technique to allow them to discover the nuclear cargos carried by all 12 human importins. Using this enhanced SILAC-Tp technique, they were able to identify the specific receptors that hundreds of proteins used as shuttles into the nucleus. The researchers also found the cargos of specific importins were grouped around particular functions, such as DNA repair, cell division, programmed cell death and circadian rhythm function. All 12 importins appeared to be associated with multiple cellular functions.

While further research is needed to clarify links to physiological functions, Imamoto is confident that the present findings will advance the understanding of interactions between receptors and their cargos and that they could eventually lead to new treatments for cancer and other conditions.

“Nuclear cytoplasmic transport is a major cellular regulatory mechanism and is linked to many phenomena related to development and disease,” says Imamoto. “If we can understand the physiological significance of specific importin pathways, we may be able to learn how to block those associated with disease development.”