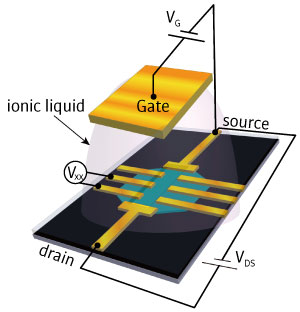 Figure 1: A flake of molybdenum disulfide (central blue channel) connected to electrodes (gold) in an electric double-layer transistor can exhibit a huge magnetochiral anisotropy effect in its superconducting state. From Ref. 1. © Wakatsuki et al., some rights reserved; exclusive licensee American Association for the Advancement of Science. Distributed under a CC BY-NC 4.0 license.

In certain materials, a magnetic field can be used to control electrical resistance. RIKEN researchers have now found that this effect is dramatically enhanced when such materials enter a superconducting state1. This discovery could help to develop superconducting diodes—devices that allow current to flow without resistance in one direction only.

In conventional metals, electrical current flows equally in any direction. But when a magnetic field is applied to materials with a particular type of asymmetry in their crystal structure, their electrical resistance depends on the strength and direction of both the magnetic field and the current. This phenomenon is called magnetochiral anisotropy.

Naoto Nagaosa of the RIKEN Center for Emergent Matter Science and colleagues have now studied magnetochiral anisotropy in flakes of molybdenum disulphide, which are composed of many atom-thin layers. Each layer contains a repeating pattern of atoms, with every molybdenum atom sandwiched between two sulfur atoms. This pattern cannot be superimposed on its mirror image—just as a left hand cannot be superimposed on a right hand—giving it a form of asymmetry called chirality. But when many of these layers stack up, each rotated 180 degrees relative to the one below it, the structure they create is no longer chiral.

The researchers used a 20-nanometer-thick, multilayer flake of molybdenum disulphide in a device called an electric double-layer transistor, which allowed them to monitor the material’s resistance when exposed to an electric field and a magnetic field (Fig. 1).

The electric field changed the material’s energy levels so that its electrons localized within each layer. Under these conditions, the material behaved as if it was a single, chiral monolayer of molybdenum disulfide.

Adding a magnetic field initially caused no discernible difference to the material’s resistance. But when the researchers cooled the molybdenum disulphide to just below −264 degrees Celsius, it became superconducting. At this point, they observed huge variations in resistance that depended on the current and the magnetic field. This magnetochiral anisotropy effect was hundreds of thousands of times larger than in conventional materials.

Superconducting currents flow when electrons form pairs, and the team proposes that this pairing up increases the electrons’ sensitivity to the asymmetry of a molybdenum disulphide monolayer. “We’ve concluded that magnetochiral anisotropy is significantly enhanced in the superconducting state,” says Nagaosa.

The same effect could be seen in other chiral superconductors, and the researchers hope to apply their discovery to create superconducting nanoelectronic devices.