The mast-er of worm defense 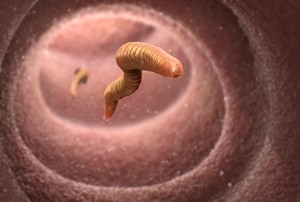 Figure 1: Parasitic worms such as this hookworm are a major global health problem. RIKEN researchers have found that the nematode parasite Heligmosomoides polygyrus (not shown) triggers mast cells to produce interleukin-33 in the intestinal lining of infected mice. © TIM VERNON / SCIENCE PHOTO LIBRARY

For the body to rid itself of parasitic worms, the immune system has to recognize worm-induced tissue damage and spring into action. A team led by RIKEN scientists has now identified the particular immune cells that pick up danger signals from infected tissues in the intestinal wall. Mast cells, the researchers showed, release a chemical messenger known as interleukin-33 (IL-33) that revs up anti-worm immunity1.

These findings could lead to new therapies against intestinal infections of the helminth worm, a major cause of malnutrition and anemia that afflicts an estimated 1.5 billion people worldwide. Furthermore, because mast cells and IL-33 have each been separately implicated in a range of other human health problems—including eczema, food allergy, asthma, rheumatoid arthritis and cardiovascular disease—similar immune mechanisms could be at play in far more than just anti-parasite defenses.

“Modulation of this pathway may not only help to contain helminth infection, but it could also be a novel therapeutic target for treating allergies and other conditions,” notes Hiroshi Ohno from the RIKEN Center for Integrative Medical Sciences.

Ohno and his colleagues had previously shown that a protein called Spi-B was essential for mice to fight off microbial pathogens in the gut. When they infected mice that lacked Spi-B with Salmonella, they observed that the animals could not mount an effective mucosal immune response against the bacterium. But to their surprise, when the researchers infected the same mice with a roundworm parasite called Heligmosomoides polygyrus, the animals were actually better protected than mice with a functioning version of Spi-B.

To figure out why, Ohno tasked Chikako Shimokawa, a visiting research fellow in his lab, with looking more closely at the immune response taking place in the linings of the gastrointestinal tract. Shimokawa discovered that the Spi-B–deficient mice had more intestinal mast cells, which were binding to alarm signals released from dying cells infected by worm larvae. The mast cells, in turn, produced the signaling molecule IL-33, which triggered an immune cascade that ultimately resulted in adult worms being expelled from the intestines.

The results point to hitherto unknown functions of mast cells and IL-33. “Although IL-33 was known to be released from injured epithelial cells on helminth infection, our findings demonstrate that mast cell-derived IL-33 is critical for helminth eradication in the earliest phase of infection,” Ohno says. “Thus, increasing or activating mast cells is potentially an attractive and effective strategy for controlling helminth infections.”