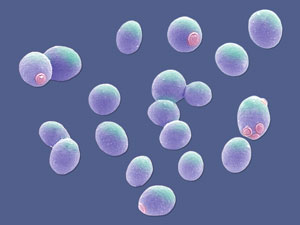 A powerful screening strategy devised by RIKEN researchers will make it easier for scientists to assign likely biological functions to different molecules, facilitating the development of safe and effective drugs1.

The scientific community is sitting atop vast mountains of genetic data as well as enormous collections of chemicals that might serve as the foundation for potential drugs. But it is notoriously difficult to figure out which genetic pathways these chemicals affect.

The new technique promises to facilitate finding these connections. It is based on two strategies developed in the 1990s, the first of which was led by Stanford University biologist Ronald Davis, who built a vast collection of yeast strains that carried different gene deletions.

“Davis wisely included a specific ‘DNA barcode’ in the genome of each strain,” says Charles Boone of the RIKEN Center for Sustainable Resource Science. “This means we can pool hundreds of mutants in a single test tube and follow their growth by simply monitoring the abundance of their barcodes.”

Around the same time, Boone’s group developed a strategy for identifying genes that collaborate in the same biological pathway by creating massive collections of double mutants and mapping genetic networks. “We scored ‘synthetic lethality’, which occurs when two single mutants are viable but the double mutant is lethal,” says Boone.

The team’s newly developed chemical screening strategy operates on a similar principle. Barcode-labeled yeast strains with various mutations are treated with a wide variety of chemical compounds. If a given gene mutation makes a cell more susceptible to the toxic effects of a particular compound, the abundance of its DNA barcode will drop. By integrating this chemical–genetic data with their genetic network data, the researchers can determine the biochemical effects of a compound, identifying which biological pathways it affects.

Boone’s group used this methodology to screen about 13,500 compounds from 7 libraries. From these compounds, they determined how about 1,500 chemicals influenced 17 essential cellular functions, including some agents that affected multiple pathways.

“Our results show that you can functionally annotate a large compound library in an efficient, systematic and unbiased manner,” comments Boone.

His team is working on a second-generation screen that will make it possible to pinpoint even more precisely the individual genes and biochemical processes affected by a compound. They are also developing a version of the assay that might prove more effective at identifying agents with clinical potential. “We really think we can take everything we’ve developed in yeast over the last 20 years and transfer it to a human cell system,” Boone says. “That’s one of the next important challenges.”