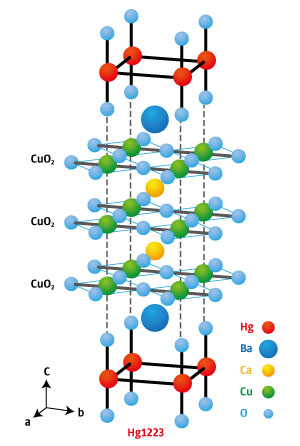 The low repulsion energy between pairs of positive charges on the oxygen sites in a cuprate superconductor could explain why the record-breaking material superconducts at a relatively high temperature1, finds a collaboration between RIKEN and the University of Lorraine, France.

Superconductors carry electricity with no resistance, offering a way to realize highly efficient devices as well as powerful electromagnets and sensitive magnetometers. The effect occurs when negatively charged electrons—or the positively charged ‘holes’ they leave behind—form pairs. But this happens only below an extremely low temperature, known as the superconducting transition temperature. This limitation has restricted practical applications of superconductors.

About 30 years ago, however, a family of copper-oxide-based superconductors known as cuprates were found to superconduct at relatively high temperatures. Mercury barium calcium cuprate (HgBa2Ca2Cu3O8+δ; Hg1223—see Fig. 1) currently holds the record, boasting a transition temperature of −139 degrees Celsius.

Still, researchers have a vital clue. If two electrons (or two holes) get too close to each other in cuprates, they repel each other very strongly. The strength of this repulsion—known as the correlation energy—depends on whether the electrons or holes are located on copper or oxygen atoms. This could ultimately determine the superconducting behavior of the charge carriers.

Chainani and collaborators have measured the repulsion between holes on copper and oxygen atoms in Hg1223. They used spectroscopic measurements to show that the correlation energy of holes on oxygen atoms was relatively low, whereas the corresponding value for copper was large.

The researchers also found that the electronic states of the copper and oxygen atoms could mix and form a hybrid singlet state. Theoretical calculations for a Cu2O7 cluster indicated that this is consistent with the correlation energies they had measured.

These results imply that holes at oxygen sites can pair up at a much lower energy cost in Hg1223. This is in marked contrast to other cuprates, which are known to have higher correlation energies for holes at oxygen sites. It could explain why Hg1223 superconducts at such a high temperature. It may also enable researchers to fine-tune the crystal structures of cuprates to further raise their transition temperatures.

“We hope our work motivates others to check the behavior of correlation energies in other cuprates,” says Chainani. “We have already started such studies in our group.”