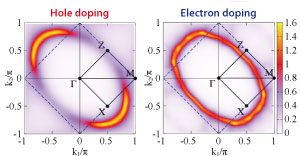 A class of materials that could help to unlock the superconducting mechanism of cuprates is so-called Mott insulators. According to conventional band theory, these materials should conduct electricity, but the strong interactions between their electrons cause them to be insulators. However, they can be made superconducting by implanting, or doping, them with certain atoms.

One of the key puzzles surrounding cuprate Mott insulators is that they behave differently depending on whether they are doped with atoms that provide positive or negative charge carriers. Specifically, they superconduct under different conditions for dopants with excess positive charges (‘holes’) than for dopants with negatively charged electrons. Researchers would probe this asymmetry by adding holes or electrons to a sample, but the complex crystal framework of most cuprates prevents this.

Now, Yoshitaka Kawasugi from RIKEN’s Condensed Molecular Materials Laboratory and his colleagues have hit on a different approach—using organic Mott insulators in combination with field-effect transistors1. The simpler electronic band structure of these organic crystals makes it easier to spot electron–hole asymmetry. Furthermore, they can be doped precisely in the same sample by applying an electric field.

The team measured how electrons in the crystal moved at varying hole and electron concentrations for various temperatures. When they applied a magnetic field, a startling asymmetry emerged—the ‘Hall coefficients’, which quantify magnetic influences, were three times larger on the hole-doped side.

“When I first saw this asymmetry, I thought the experiment had failed,” recalls Kawasugi. “The detailed doping dependence also revealed that something special was happening,” he notes.

Theoretical calculations by RIKEN colleague Kazuhiro Seki helped uncover the reason for this anomaly—excess hole doping caused ‘pseudogap’ states to form. This is an exciting finding since it could indicate that superconductivity is not far off. “Pseudogaps can be precursors for the superconducting state if the transition temperature for the hole-doped side is much higher than the electron-doped case,” says Kawasugi. “Further electron and hole doping may induce this unconventional superconductivity.”