NASA’s Juno spacecraft has helped explain how volcanoes on the moon Io spew particles that are flung out by Jupiter’s magnetic field, before rebounding back. A high-speed atmospheric encounter on the return leg creates the Red Giant’s once mysterious transient auroras.

Io is a violent moon. Trapped in an incessant gravitational tug-of-war between the gas giant Jupiter and its other moons, Io’s core is continuously kneaded by burning tidal forces. As a result, volcanoes on Io regularly throw vast quantities of molten material, dust and sulfur gas into the atmosphere.

In May 2017, an international team of researchers led by Tomoki Kimura of the Nishina Center for Accelerator‐Based Science at RIKEN used data generated by NASA space probe Juno to confirm that Io’s fiery volcanic activity contributes to auroral lights brightening Jupiter’s upper atmosphere.

Jupiter’s auroras are far more complex than Earth’s. The planet’s poles feature an auroral light display, which — as on Earth — is caused by solar wind, high-energy particles that escape the Sun’s gravity and shoot across the Solar System. When they reach Jupiter, the planet’s magnetic field guides these to the planet’s poles, where they create constant auroral lights.

But Jupiter’s auroras occasionally peak in brightness in events known as transient auroras — long a mystery to astronomers. It was confusing if you looked at Earth’s model, says Kimura: “Sometimes aurora emission is highly correlated with the solar wind, but sometimes it’s not correlated with it at all.”

In 2014, the Japanese extreme-ultraviolet space telescope Hisaki observed a brightening of Jupiter’s aurora that lasted 3–11 hours during a period when the solar wind was relatively quiet. Kimura was working a four-month auroral imaging campaign on interactions in the region above Jupiter’s magnetic field, and, while intrigued, he needed a closer look underneath this plasma layer to unpick transient auroras. 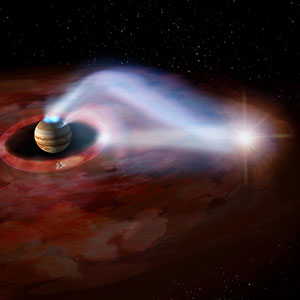 The study of Jupiter’s auroras was limited to observations from Earth-orbiting satellites until the arrival of NASA space probe Juno at Jupiter in July 2016.

Finally able to look more closely into the auroras, Kimura led a team of planetary scientists from institutions all over the world, including Johns Hopkins University in the United States, Université de Liège in Belgium and the University of Leicester in the United Kingdom. The team coordinated in mid-2016 to have the Hisaki satellite and the Hubble Space Telescope both turn their electronic eyes to Jupiter and its magnetosphere — where charged particles are controlled by the planet’s magnetic-field acting as a shield against solar wind. At the same time, Juno began its approach to Jupiter, travelling upstream of the solar wind, well positioned to measure the particles buffeting the gas giant.

The first thing that Hisaki’s six-month monitoring revealed was that sulfur gas spewed out from Io’s volcanoes is caught up in a ‘tail’ created by the force of the solar wind pushing Jupiter’s enormous magnetic field into a windsock shape as the planet orbits. The magnetic field is strong enough to strip electrons from the sulfur molecules, making them charged.

Some of these charged particles from Io are then pulled directly down to Jupiter’s poles, where the curved lines of the magnetic fields converge. These particles create their own auroral phenomenon—a small point of light that is Io’s auroral ‘footprint’.

However, that is only a small part of the picture. The rest of the charged sulfur particles stripped from Io are also collected by Jupiter’s magnetic field, but they take the long way around to the poles.

Jupiter’s magnetosphere actually stretches roughly three million kilometers toward the Sun, and it affects the solar wind far back. It turns out that a good proportion of Io’s plasma contribution actually gets flung out to the farther reaches of Jupiter’s magnetosphere by the centrifugal force of the spinning gas giant, before being brought back to the planet. This process accelerates these molecules to fantastic speeds, imbuing them with enormous energy. When they do finally crash into Jupiter’s atmosphere, they cause a dramatic brightening — the transient auroras.

As well as occurring outside periods of solar wind activity, transient auroras are distinguishable because they take place in a different area on Jupiter. “We found some aurora brightening that starts at the higher latitudes in the polar region and then expands into lower latitudes,” Kimura says.

The speed at which these charged particles travel was also surprising. “This is very fast transport of energy, especially energetic plasma, which happens within a few hours—less than one Jupiter rotation,” he says.

The other interesting finding was how the particles pulled from Io’s surface interact with the solar wind and aurora. Previously, it was assumed that the solar wind had little to do with transient auroras. But data from Juno suggests otherwise. Just as Juno arrived upstream of Jupiter, it detected what is known as a shock wave — an increase in the density and velocity of solar wind striking the planet. This happened just before a large transient auroral event, but understanding the connection between these two events was complex. “There was a very long time lag between the shock arrival at Jupiter and the auroral brightening — an extraordinarily long time lag,” Kimura says. It was roughly 10 hours. “The connection is very fast in general — a few hours, so about 10 hours is too long.”

It’s still something of a mystery, but Kimura suggests that a compression of the magnetosphere by the shock wave of solar wind may be somehow slowed by the heavier charged sulfur particles from Io. He hopes that looking again at the data from Hisaki and the Hubble Space Telescope will help further unravel this question.

Kimura is also intrigued by how Io’s charged volcanic emissions might affect some of the other moons in the Jovian system, such as icy Europa. “There is ocean beneath the surface ice, and this is a very important environment to look for extraterrestrial life,” says Kimura. He speculates that the high-energy plasma from Io, which bathes the other moons as they orbit Jupiter, might provide an energy source to fuel chemical reactions on their surfaces, which could produce organic compounds, and therefore life.

“These materials could then be transported into the subsurface ocean because of plate tectonics or some geological activity,” he says. “It’s just speculation, but in the future I want to explore these kinds of fascinating astrobiological questions.” 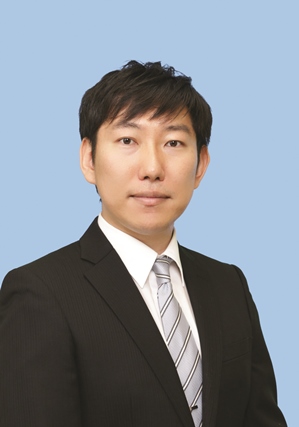 Tomoki Kimura obtained his PhD from Tohoku University in 2010. After joining the Hisaki satellite mission and other space science programs at Japan Aerospace Exploration Agency, in 2015, he started working as a special postdoctoral research fellow at the RIKEN Tamagawa High Energy Astrophysics Laboratory. His current research interests are plasma accelerations (for example, aurora) at planetary magnetospheres and their physical and chemical impacts on icy bodies. He is also contributing to the development of the Jupiter Icy Moon Exploration (JUICE) mission led by the European Space Agency.