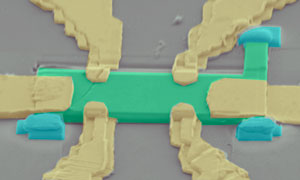 Crystal magnets that are mirror images of each other could simplify the production of thin-film semiconductor diodes by turning entire crystals into current rectifiers, a team of researchers from the RIKEN Center for Emergent Matter Science and the University of Tokyo has shown1.

Two chiral objects are identical in every way except that they are mirror images of each other, just like our left and right hands. The concept of chirality has elicited a lot of interest and applications in fields such as chemistry, optics and electromagnetism.

The magnetic spin properties of electrons have resisted easy analysis. Original theories postulated that, in crystals, spins should be simulated as fields that travel wave-like through the lattice. Further calculations and the appearance of electron pairs in materials such as high-temperature superconductors demanded more-realistic models that included interactions between individual spin particles. Modern treatments use fluctuations in the spin density of a crystal to account for correlations between electrons and identify useful magnetic behavior.

“Spin fluctuations can also have chirality,” says Tomoyuki Yokouchi from the University of Tokyo. “However, the results that might occur when chirality and fluctuations come together haven’t really been explored yet.”

Yokouchi and colleagues used manganese silicon—a magnetic alloy with a chiral structure—to try and spot a unique type of charge transport known as the electrical magnetochiral effect. This phenomenon makes electrical flow directionally dependent—highly conductive when traveling along right-handed pathways, for instance, but slow and resistive when pushed to the left.

“This is a kind of diode effect,” explains Yokouchi. “Usually the effect appears at the interface of p–n junctions, but in this case it occurs in the bulk of the material.”

But because the voltage generated by the electrical magnetochiral effect is so low, capturing evidence of it in action is challenging. The researchers overcame this difficulty by microfabricating thin plates of manganese silicon capable of handling the enormous current densities needed to initiate directional charge transport (Fig. 1). Experiments showed that the desired electrical magnetochiral signals emerged at specific regions defined by magnetic field, temperature and pressure.

After observing the specific phase boundaries where chiral current responses occurred, the team proposed a mechanism whereby thermal spin fluctuations set off signals when electrons are slightly hotter than magnetic ordering conditions. At low temperatures and high pressures, on the other hand, quantum spin fluctuations also contribute to the chiral transport.

“In principle, these spin fluctuations should exist in chiral magnets other than manganese silicon,” says Yokouchi. “The mechanisms we uncovered can guide searches for materials capable of acting as bulk diodes.”