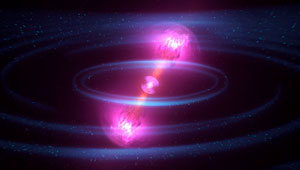 Brilliant cosmic gamma-ray bursts may become a new tool for measuring interstellar distance after an international team led by Maria Dainotti, a postdoctoral researcher at RIKEN in Shigehiro Nagataki’s Chief Scientist Laboratory at the time, found a tight correlation between three traits of the bursts1.

Just as a candle appears dimmer the further away it is, the consistent brightness of certain celestial objects can be used to measure distance to around 11 billion light years. These so-called standard candles are a mainstay of the astronomer’s toolkit.

In the past decade, a new potential standard candle contender has emerged: gamma-ray bursts (GRBs). These by-products of violent explosions have the potential to measure more than 13 billion light years. “That’s the ultimate aim,” Dainotti says. But there was a problem: there did not seem anything standard about GRB luminosity—GRB energies can differ by orders of magnitude, as can their durations.

Short GRBs spike and drop off in less than 2 seconds. Long GRBs are defined by a tail of longer wavelengths, such as x-rays, after the initial spike. The tail can plateau for a few minutes, hours or even days and then fade over hours or even weeks. Long GRBs are thought to be associated with supernovae.

So Dainotti and her international collaborators looked to see whether there was any correlation within a group of 45 previously measured GRBs with relatively long, flat plateaus. They plotted these ‘gold GRBs’ on a three-dimensional graph according to the initial spike’s peak luminosity, how long the tail plateau lasted and the luminosity of the plateau. The points formed a plane with very little scatter.

The team then plotted more than 130 other GRBs with different qualities on the graph and were amazed to see that the gold sample showed the smallest scatter along the plane. Short GRBs with extended emission, which have traits of both short and long GRBs, were the only type to deviate significantly from the gold GRB plane.

“This probably means these GRBs have a different physical mechanism,” Dainotti says. “We have to reassess whether they belong to the short GRB category.”

When calibrated, GRBs may be recruited as cosmic measuring devices stretching back to a mere 600 million years after the Big Bang.

Dainotti hopes that proposals for new GRB missions that will gather more data on GRBs at large distances, such as THESEUS, will soon be accepted. Meanwhile, the Swift and Fermi satellites will continue to acquire data, which will help calibrate the new cosmic ruler and find out more about these energetic and enigmatic events.

Maria Dainotti talked about this research and the current situation of women scientists in the field of astrophysics in an interview with Giorgio Pacifici, which was broadcast on the news program TG2 of Rai 2, an Italian state-owned television channel. © RAI 2018