Investigating the interaction between systems of different dimensions 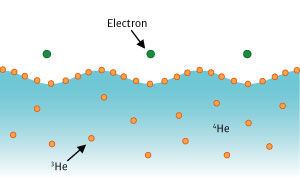 Figure 1: At low temperatures, 2D helium-3 forms on the surface of 3D helium-4. Adapted, with permission, from Ref. 1. © 2018 by the American Physical Society.

By studying a mixture of two isotopes of helium, RIKEN researchers have shed light on the exotic physics that can be generated by combining two systems with different dimensions1.

Intriguing phenomena can occur in systems in which different dimensions coexist, such as electrons on a metal surface. But due to the complexities involved, experimentalists generally tend to study systems that have a single well-defined dimension.

One complication is that a 2D subsystem and 3D one are often not well separated, making it tricky to discover how they interact with each other. To overcome this problem, Hiroki Ikegami from the RIKEN Center for Emergent Matter Science and his colleagues have investigated multidimensionality using a system consisting of two isotopes of liquid helium, which contained the same number of protons but different numbers of neutrons.

The system was made up of two isotopes of helium: helium-3 (3He; so named because it has one neutron and two protons) and helium-4 (4He; which has two neutrons and two protons and accounts for 99.9999 per cent of helium in nature). It consisted of two subsystems: 3D3He dissolved in liquid4He with a 2D3He layer on the surface of the3He−4He mixture (Fig. 1). (The4He can be regarded as a vacuum since it does not affect the other subsystems.) This system is unique in that distinct 2D and 3D systems of identical particles (3He) coexist. 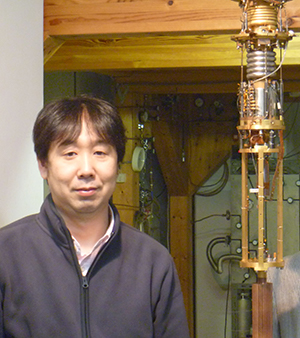 Hiroki Ikegami next to the system he and his co-workers used to show that the electron mobility in 2D helium-3 is influenced by the presence of 3D helium-3. © 2018 RIKEN

The RIKEN team explored how the 3D3He system interacted with the 2D3He layer by using electrons floating about 10 nanometers above the 2D3He layer. The electrons in the surface layer of the mixture arranged themselves into a regular structure known as a Wigner crystal. By monitoring changes in this Wigner crystal, the researchers were able to probe the interaction between the 3D3He and 2D3He systems.

In particular, they observed an anomalous enhancement in the mobility of the Wigner crystal of electrons when the 3D and 2D systems interacted with each other compared to when they did not interact. The researchers found that this enhancement was due to3He quasiparticles being reflected from the 2D3He layer. This is the first time that such reflection has been observed.

“We hope to next study our system at even lower temperatures where it is possible that the 2D3He will become a superfluid,” says Ikegami. “The technique we used in this study provides a direct means of searching for this fascinating state.”