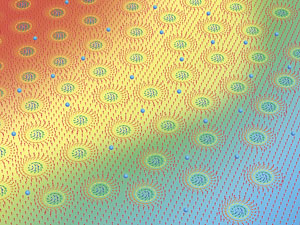 Figure 1: Defects (blue spheres), which exist in all materials, could turn a skyrmion crystal into a skyrmion glass. Reprinted, with permission, from Ref. 1 © 2018 by the American Physical Society

A theory for understanding complex magnetic textures in real, rather than ideal, materials has been developed by two RIKEN researchers1. This theory will assist the development of ‘spintronic’ devices.

The simplest ordering—all the spins aligned in the same direction—gives rise to ferromagnetism, so-called because it is the form of magnetism found in iron. A more complicated example is the skyrmion: a vortex-like pattern of symmetrically twisted spins around a central core.

Skyrmions behave like particles and are surprisingly robust, despite their intricate pattern. They can be controlled with very small currents, making them appealing for the development of low-power spin-based electronics, or spintronics.

They found that the defects hinder, or pin, the motion of skyrmions. Under these conditions, skyrmions behave less like a crystalline material and more like a glassy one (Fig. 1). “In the presence of the disorder, the skyrmion crystal turns into glass,” says Nagaosa. “This glassy state is most relevant to the realistic situation and hence also to applications such as magnetic memory.”

Pinning effects have also been associated with other forms of magnetic ordering, including ferromagnetism and helimagnetism (where spins form a helical pattern). Hoshino and Nagaosa’s results show that these three forms of magnetism are completely different from each other and that the properties can be dramatically altered simply by varying the magnetic field.

Their theoretical analysis predicts many of the physically observable characteristics of a magnetic skyrmion glass, including its electrical conductivity, magnetic susceptibility, and threshold current for skyrmion motion—all signatures that could guide experimental research into these materials.

“The next step is to explore these effects when the external stimuli, such as the current, are very strong,” says Nagaosa. “In this case, the skyrmions deform like a polymer, and this could open up a new field of ‘soft condensed matter’ in magnets.”