Electricity can be used to control magnetic patterns in an alloy, opening up the possibility of using them in high-performance devices 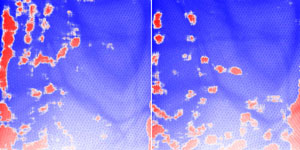 Figure 1: Skyrmions (blue) and helical magnetic structures (red) coexist in separate domains in an iron−germanium alloy (left). Applying a current moves these magnetic domain boundaries in the same direction as the flow of electrons (right). Reprinted, with permission, from Ref. 1. © 2018 American Chemical Society

An electrical current can be used to steer exotic magnetic patterns in an alloy, RIKEN researchers have shown1. Such patterns are promising for storing and processing data in next-generation, low-power computer chips.

Some of these patterns are made of skyrmions—tiny whirlpools in the magnetic structure of a material that can move around as if they were distinct particles. When skyrmions cluster together, they can form a lattice that looks like a honeycomb pattern under a special type of transmission electron microscope that images magnetic structures in materials. Other magnetic patterns, known as helical magnetic structures, appear as a series of stripes. Researchers are just beginning to explore how electric currents can be used to manipulate these structures.

Kiyou Shibata of the RIKEN Center for Emergent Matter Science and his colleagues have now explored how electric pulses affect skyrmions and helical magnetic structures that coexist in a thin plate of an iron–germanium alloy.

These two structures could coexist under certain conditions, although they mostly stayed in separate areas, or domains, with clear borders between them. “The spatial distribution of the two phases largely depends on the history of temperature, magnetic field and current application,” notes Shibata.

The team took a series of transmission electron microscopy images to record what happened to these magnetic structures as they applied electrical pulses across the alloy (Fig. 1). They then used machine learning to help analyze the images. “Machine learning was a useful tool for us to process more than 100 pairs of images and to quantify the changes in the magnetic structures,” says Shibata.

According to Shibata, their results suggest that these magnetic structures are harder to shift around with an electrical current than skyrmions in the ferromagnetic background.

The team plans to continue using transmission electron microscopy to study how skyrmions behave under different conditions. “We believe our systematic results can contribute to putting skyrmion manipulation technology on a firm basis,” says Shibata.