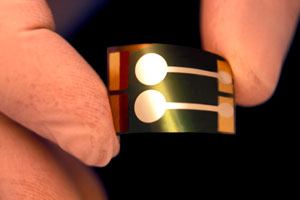 Figure 1: Organic solar cells are promising alternatives to silicon-based ones due to the low cost of their manufacturing technology, the low consumption of raw materials, their reduced weight and the flexibility of plastic substrates. © PATRICK LANDMANN/SCIENCE PHOTO LIBRARY

Improving the recipe of organic solar materials and precisely controlling how the ingredients mix could significantly improve their light-conversion performance, an all-RIKEN team has shown1.

Organic photovoltaics are potential low-cost rivals to silicon solar cells. Some of the most efficient organic photovoltaics consist of long-chain semiconducting polymers mixed with spherical fullerene molecules—a combination called a mixed bulk heterojunction that is reminiscent of spaghetti and meatballs in miniature. When the polymer component captures light, an excited electron is generated, which is then transferred to the electron-accepting fullerene before traveling through the material to the electrode.

Tajima’s team produced two semiconducting polymers that differed only in the positions of the side chains along their backbones. “We wanted to change only one parameter while keeping others the same to see its effects,” Tajima says. These side chains control how close the fullerene molecules can get to the polymer backbone.

Equally importantly, the polymers contained methoxy groups, which give a clear and unambiguous nuclear magnetic resonance (NMR) signal. This allowed the team to use two-dimensional NMR analysis to assess how close the fullerene was to each polymer.

Fullerene proximity did significantly impact the materials’ photovoltaic efficiency, the team discovered. Rather like a good spaghetti dinner needs intimately mixed noodles and meatballs, bulk heterojunction performance was maximized in materials where the side chains allowed close contact between the fullerene and electron-accepting segments of the polymer strands, Tajima’s team showed.

As the polymers were designed for an investigative study rather than for maximum performance, the team has not broken any bulk heterojunction photovoltaic efficiency records yet. “However, the same principle should apply to high-performance polymers with more complicated structures,” Tajima says.

Recently, the fullerene component has been replaced with alternative electron-acceptor molecules in top-performing organic photovoltaics. “The next challenge will be to extend our concept and methodology to non-fullerene acceptors,” Tajima adds. Controlling the new acceptors’ orientation and proximity to the polymer chain could lead to a breakthrough in organic photovoltaic performance.