Working at the interface for future energy 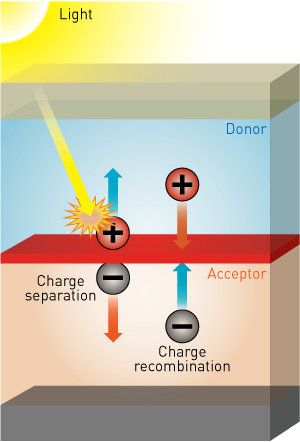 Figure 1: The interface between a donor and acceptor material determines the efficiency at which photogenerated electrons (–) and holes (+) are separated to produce a current in a photovoltaic device. © 2015 Keisuke Tajima, RIKEN Center for Emergent Matter Science

RIKEN researchers have demonstrated the importance of the interface between two organic materials in maximizing the generation of useful current, providing new insight that could help improve the efficiency of polymer solar cells1.

Improving the efficiency of solar cells requires an intimate understanding of what happens when light strikes a material. Most semiconductor-based photovoltaic devices have essentially the same operating principle: light absorbed by the active material creates an electron and a positively charged counterpart, known as a hole. For a current to flow, these two charges must move in opposite directions (Fig. 1), which is difficult to achieve in organic semiconductors.

One solution is to combine two different materials, referred to as a donor and an acceptor, so that a molecular heterojunction exists at the interface. The energy offset between the molecular orbitals of the two materials helps to separate the photogenerated charge carriers. A surprising experimental observation, however, is that the process is more efficient than expected by theory, with some organic photovoltaic devices exhibiting a quantum efficiency close to 100%. “A simple calculation estimates that the binding energy is much stronger than thermal energy at room temperature,” explains Keisuke Tajima from the RIKEN team. “Several theories have been proposed to rationalize this paradox, but the debate is still ongoing.”

Previous studies had looked at various mechanisms for weakening the attraction between charge pairs at the interface, but experimental studies provided contradictory results. The results of these studies suggest, however, that the secret lies in the molecular detail at the donor–acceptor interface.

Tajima, working with his colleagues from the RIKEN Center for Emergent Matter Science and the University of Tokyo, attempted to get a better understanding of this problem by carefully controlling the energy levels in the vicinity of donor–acceptor interfaces. Using a contact film transfer method, the researchers were able to stick the donor and acceptor films together at room temperature without using organic solvents to give the well-defined interfaces needed for the experiment.

“Our results show that the energetics of the first molecular monolayer at the donor–acceptor interfaces are of vital importance for charge generation and recombination processes in an organic photovoltaic cell, indicating that the solar cell efficiency can be significantly improved,” explains Tajima. “The next big challenge is to implement these interfaces precisely at the molecular level in bulk heterojunction structures, preferably through molecular self-organization. This could push the envelope of organic photovoltaic performance in the future.”