Highly energetic neutrino traced back to a blazar

Detection of an energetic neutrino, along with gamma-ray observations, suggests that a distant black hole is a source of high-energy cosmic rays 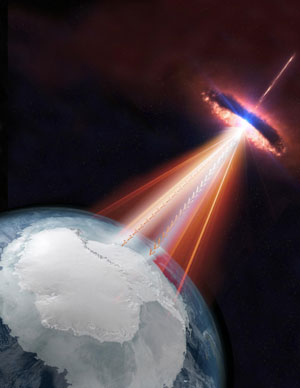 The source of a high-energy particle called a neutrino, which arrived on Earth after traveling almost 4 billion light years through space, has been identified by an international team of more than 1,000 astronomers. A RIKEN researcher helped to deduce that the neutrino most likely came from a blazar—a galaxy with a gigantic spinning black hole at its heart. The discovery suggests that blazars also accelerate protons and other particles to incredible energies, firing them across the Universe until they eventually rain down on Earth as high-energy cosmic rays1.

Spinning black holes are thought to produce powerful jets of cosmic ray particles. These jets are surrounded by a slower-moving sheath of gas and low-energy photons. When the cosmic rays collide with the outer sheath, they should produce high-energy neutrinos and gamma rays.

Cosmic rays can be deflected by magnetic fields during their journey through space, making it tricky for astronomers to pinpoint their origins. In contrast, neutrinos and gamma rays travel in reliably straight lines, allowing astronomers to use them as tracers for cosmic-ray production.

On 22 September 2017, the IceCube Neutrino Observatory detected a neutrino with a huge energy of 290 tera-electron volts (290 x 1012 electron volts). IceCube’s 5,000 optical sensors are embedded in Antarctic ice, and capture the brief flashes of light created when such high-energy neutrinos collide with atoms in the ice. This enabled IceCube scientists to work out roughly where the neutrino came from in the sky.

Within a minute, this detection triggered other observatories around the world to look at the same region of space. NASA’s orbiting Fermi Gamma-ray Space Telescope soon confirmed that the neutrino came from the direction of a blazar known as TXS 0506+056, which was emitting a burst of gamma rays.

Over the next 40 days, the Major Atmospheric Gamma-ray Imaging Cherenkov (MAGIC) telescopes found that the gamma rays from the blazar at extreme energies were showing tell-tale signs of how the neutrino came about.

“The spectrum measured by MAGIC strongly points to the neutrino being generated by a high-energy proton in the blazar’s jet interacting with low-energy photons,” says Susumu Inoue of RIKEN’s Interdisciplinary Theoretical and Mathematical Sciences (iTHEMS) program, who is part of the MAGIC team.

The MAGIC team calculated that the blazar could be generating cosmic rays with energies of 1014 to 1018 electron volts, which would make them among the most energetic particles in the Universe2.