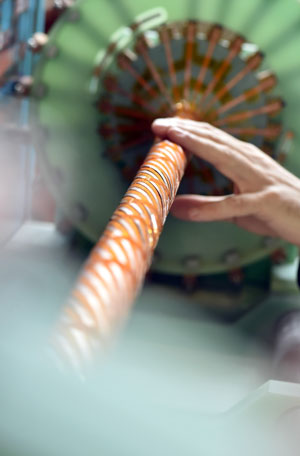 A superconductor model cable on display in a museum in Germany.Germany has been one of the first countries to use superconductor cables to supply electricity. © 2018 dma Picture Alliance / Alamy Stock Photo

RIKEN researchers have developed a brand-new method for inducing superconductivity, by very rapidly cooling a target material using electrical pulses and effectively bypassing other states that might be more stable. RIKEN’s Hiroshi Oike says it will vastly broaden the range of known superconducting materials.

In most conductors, the natural kinetic motion of warm atoms somewhat disrupts the flow of electrons (electricity), some of which are lost as heat. However, when a superconductor’s atoms are very cold, they stop vibrating around as vigorously, and electrons are free to zoom along the material without resistance because of quantum mechanical effects. Because of this, superconductors don’t suffer from energy scattering and loss, and they can harness larger electric currents.

What Oike and his colleagues from the RIKEN Center for Emergent Matter Science and the University of Tokyo realized is that electron ordering takes time, so reducing the temperature of a potential superconductor extremely fast could circumvent other non-superconducting states that might otherwise take precedence. The group describe it as a “thermal quenching approach” based on the fact that within a time range, a system may be trapped in a local minimum state. In an overview on Oike’s study, Nature compared the idea to plunging hot steel into cold water to harden it, which bypasses small changes that happen during drawn out cooling.

Excitingly, the group found that, in the right conditions, superconductivity does indeed emerge as ‘a metastable state’—the state with the longest lifetime against other excited states—even if more stable competing orders were bypassed during cooling.

Important implications exist if new superconductors are found that operate at higher temperatures than those we already know. Currently, superconducting materials only exhibit this state at very low temperatures—the highest temperate a superconductor is known to operate at is −70°C. Finding higher temperature superconductors could vastly reduce the need for cumbersome cooling apparatus. This change could quickly dovetail into more efficient computing and electrical devices, and MRI machines would be able to finally shed their distinct bulky doughnut shape, which is created by huge liquid cooling systems surrounding superconductors emitting the powerful magnetic fields essential to an MRI’s function. 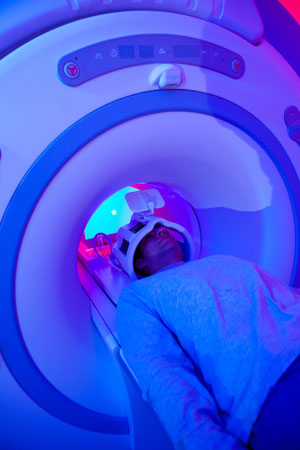 Massive cooling systems are part of what make magnetic resonance imaging machines so bulky. This is down to the fact that most harness superconductors that need to be very cold. © 2018 BonkersAboutPictures / Alamy Stock Photo

He explains that localized particles have greater kinetic energy, but smaller repulsion energy, than delocalized ones, and so localized and delocalized states are in very close energetic competition. “Electrons at low temperatures are often localized to minimize the energy cost of their mutual repulsion,” Oike says. “But electrons in a superconducting state are delocalized and consequently pay a larger energetic cost because a delocalized electron has more chance to get close to, and repel, other electrons.” As a result, for many materials another state takes precedence over a superconducting state. 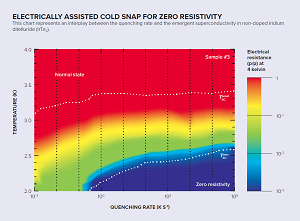 Electrically assisted cold snap for zero resistivity: this chart represents an interplay between the quenching rate and the emergent superconductivity in non-doped iridium ditelluride (IrTe2). © GRAPHIC: from Oike, H., et al. CC BY-NC 4.0 Wording changes were made to this document.

To prove experimentally that their quick cooling idea could effectively line-jump other states, Oike’s team selected a non-superconducting material called iridium ditelluride. The electrons in iridium telluride are delocalized at high temperatures, but usually form an ordered state when slowly cooled. It’s also known from previous research that this material has a superconducting state ‘nearby’ its natural state, which makes it the perfect choice for this experiment.

“In a conventional heater in air, the element cools down by several degrees per minute when it is switched off,” says Oike. “But when the size of the heater is very small and it is attached to a cold substrate, the cooling rate can exceed 10,000,000 degrees per second.” In less than 10 microseconds the pulses heated the metal to more than 27°C before cooling it to −269°C.

The RIKEN team confirmed the creation of a superconducting state by measuring a zero electrical-resistance in their sample at its coolest, and they observed that this non-resistant state remained intact for a week.

Achieving this switching phenomenon electrically means that it could also potentially be applied to devices such as superconducting circuits, which are seen as one possible route to quantum computers. And the team is not stopping here: they next hope to investigate other ways of achieving this approach to creating a superconductor. 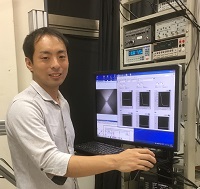