In a surprise finding, a versatile protein has been shown to inhibit the activation of immune cells 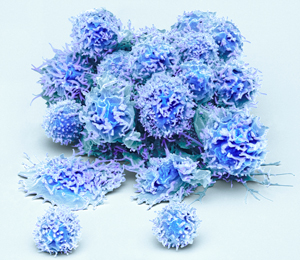 The immune response of mice to pathogens is curbed by a multitasking protein, CIN85, which applies the brakes to immune cells called T cells, researchers at RIKEN have shown1. This finding could assist scientists to find new ways to tinker with the body’s immune system so that it attacks cancer cells more effectively.

A type of white blood cell, T cells are a key player in the body’s immune response to pathogens such as bacteria and viruses. They are activated by proteins known as antigens, which are found on the surfaces of pathogens. T-cell activation triggers a highly complex cascade of reactions involving many different molecules. Some of these reactions reduce the strength and duration of positive signals to prevent T cells from being excessively activated, which could lead to harmful effects such as inflammation and autoimmune disorders.

Now, Takashi Saito at the RIKEN Center for Integrative Medical Sciences and his colleagues have shown that the protein CIN85 curtails the activation of T cells.

CIN85 plays different roles in different cells. To discover its function on T cells, the researchers produced mice that lacked CIN85 and then compared their immune response with that of normal mice. Saito and his team found that the mice lacking CIN85 produced more T cells as well as interleukin-2, a signaling molecule in the immune system, after antigen stimulation.

The result came as a surprise since CIN85 had been found to have the opposite effect in B cells, another key type of immune cell. “We had expected the opposite finding because CIN85 promotes B-cell receptor signaling, and B cells are similar to T cells from a signaling point of view,” explains Saito.

Interestingly, the researchers found that a close cousin of CIN85 called CD2AP does not inhibit the activation of T cells. There had been speculation that CD2AP would have similar effects on cells as CIN85 because it contains similar sequences of amino acids as CIN85. But when Saito’s team examined mice lacking CD2AP, they found that their T-cell activation did not differ from that of normal mice.

The team also clarified the mechanism by which CIN85 inhibits T-cell activation: they found that CIN85 recruits an inhibitory phosphatase known as Sts-2 to dampen activation signals.

Saito notes that the finding is very topical at the moment, since there is a lot of interest in finding affordable ways to manipulate the immune system so that it can attack tumors more effectively.