Fighting their way to the middle 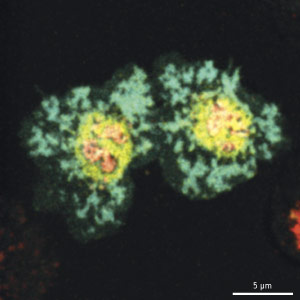 Figure 1: Over time, clusters of CTLA-4 molecules (yellow) gather alongside TCRs (red) within the cSMAC; in doing so, they displace CD28 (green) and suppress TCR signaling. © 2011 Takashi Saito

Foreign entities within the body get chopped into pieces by antigen-presenting cells (APCs), which display the resulting chunks on their surface. These antigens can subsequently be recognized and bound by T cell receptors (TCRs), and the interaction between a T cell and an antigen-bearing APC eventually triggers the onset of an immune response against the antigen.

Inappropriate responses by this system, however, can give rise to disastrous medical consequences, and there is keen interest in developing more sophisticated ways to modulate how T cells react to perceived threats. “Ultimately, we would like to regulate T cell function and activation in order to overcome autoimmune diseases, allergy, or infectious diseases,” explains Takashi Saito, of the RIKEN Center for Allergy and Immunology (RCAI) in Yokohama.

New findings from a team led by Saito and RCAI colleague Tadashi Yokosuka could ultimately prove valuable for such efforts, by revealing insights into the mode of action of cytotoxic T-lymphocyte-associated protein 4 (CTLA-4), an inhibitor of TCR signaling1. When T cells associate with APCs, they form what is known as an ‘immunological synapse’, a juncture where numerous proteins assemble into elaborate complexes, such as the central supramolecular activation cluster (cSMAC). By establishing experimental conditions that simulate this cellular interaction, the researchers were able to monitor the dynamic rearrangements that take place at the cSMAC and its environs.

CD28, a T cell protein that promotes TCR signaling, typically assembles at a narrowly defined region of the cSMAC, where it interacts with CD80, a protein expressed on the surface of APCs. Saito, Yokosuka and colleagues determined that CTLA-4 gradually gathers at the immunological synapse and subsequently forms into clusters within the exact same area of the cSMAC as CD28, where it directly competes to bind CD80 (Fig. 1). “Positive regulation by CD28 and negative regulation by CTLA-4 are induced at the same place in the cell,” says Saito. “Without accumulating at the cSMAC, CTLA-4 cannot inhibit T cell activation.”

In addition to illuminating a mechanism by which T cell responses get fine-tuned, these findings could ultimately yield benefits for patients suffering from a variety of conditions. “Anti-CTLA-4 antibody therapy has been utilized for cancer patients, enhancing tumor immunity by inhibiting regulatory T cells, and CTLA-4-based fusion proteins have been used to block autoimmune diseases such as arthritis,” says Saito. “Our findings will enable us to explore new therapeutic concepts based on the inhibition of the dynamic movement of regulatory molecules such as CTLA-4.”