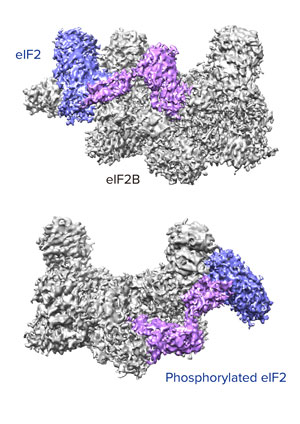 Figure 1: Unphosphorylated (top) and phosphorylated (bottom) forms of eIF2 (pink and purple complex) bind in completely different ways to eIF2B, explaining why eIF2 is inactivated by phosphorylation in a cell’s response to stress. © 2019 RIKEN Center for Biosystems Dynamics Research

Structural biologists at RIKEN have discovered how a small modification to a key molecule can shut down a cell’s protein-producing machinery when the cell is stressed1. This finding could help to find new treatments for neurodegenerative diseases and traumatic brain injury.

Before a stressful event such as giving an important speech, many people experience loss of appetite as the body redirects resources from digestion to ‘fight or flight’ responses. A similar thing happens on a cellular level—cells will stop producing proteins when subject to a wide range of stresses, including starvation or viral infection.

The key event in this stress response is the addition of a phosphate group (PO43−) to a protein called eukaryotic translation initiation factor 2 (eIF2). As its name suggests, this protein plays a key role in initiating the translation of messenger RNA into proteins in the cells of eukaryotes. However, the addition of a phosphate group stops it from performing this role, putting the brakes on protein production so that the cell can concentrate its resources on processes more necessary for survival. But it wasn’t clear how adding such a small group could have such a big effect on eIF2’s function.

Now, Takuhiro Ito and Kazuhiro Kashiwagi of the RIKEN Center for Biosystems Dynamics Research and his co-workers have used X-ray diffraction and cryo-electron microscopy to determine the molecular structure of eIF2 when it is bound to eIF2B, which activates eIF2. They found that eIF2 binds to eIF2B in a completely different way when it is phosphorylated compared to its unphosphorylated form (Fig. 1).

Takuhiro Ito (far right) and Kazuhiro Kashiwagi (far left) and co-workers have found that the unphosphorylated and phosphorylated forms of eukaryotic translation initiation factor 2 (eIF2) bind in completely different ways to eIF2B, which explains why eIF2 is inactivated by phosphorylation in the integrated stress response. © 2019 RIKEN

“This difference in binding was really surprising for me,” recalls Ito. “When Kashiwagi showed me the density maps for the first time, I was totally shocked by the difference. I couldn’t believe it.”

This finding was the culmination of about 15 years of work for Ito as he started investigating the structure of eIF2 when he was a postdoc in 2004. “It’s an interesting and nice result at the end of a long investigation,” he comments. It was also a race against time as other groups were studying the same system. Another study covering a different aspect of the eIF2−eIF2B system was published in the same issue of Science as Ito’s paper.

The team intends to determine the structure of another initiation factor associated with the system. They are also interested in finding out more about the mechanism of eIF2 and eIF2B in the stress response of cells.