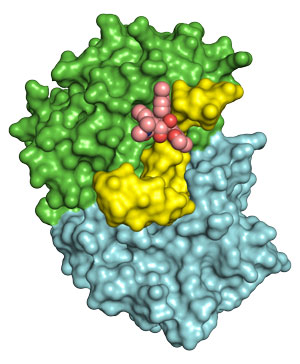 The discovery by RIKEN researchers of why a natural drug compound kills tumor cells—but not the plant from which it is derived—could help researchers develop new therapeutic weapons against cancer1.

The leaves of the Chinese perfume tree Aglaia odorata contain a potent inhibitor of cancer proliferation. This drug, known as rocaglamide A (RocA), was thought to work by targeting an enzyme called eIF4A, which is needed to produce proteins in cells.

A few years ago, Shintaro Iwasaki from the RIKEN RNA Systems Biochemistry Laboratory showed that RocA clamps onto eIF4A at a specific RNA sequence, one jam-packed with consecutive adenines (As) and guanines (Gs). The drug then locks the complex into place and leads to defects in protein synthesis. It was the first time anyone had described a drug capable of stabilizing RNA–protein interactions in a sequence-selective manner. But as it turns out, the picture was not yet complete.

Iwasaki collaborated with Takuhiro Ito from the RIKEN Center for Biosystems Dynamics Research to characterize the three-dimensional structure formed between RocA, eIF4A1 and target RNA. They showed that the long stretch of As and Gs produces a sharp bend in the RNA, creating a molecular cavity that fits the cancer-killing drug like a glove (Fig. 1). “To our surprise, RocA directly senses the RNA sequence on eIF4A, without affecting the protein’s shape,” Iwasaki explains. 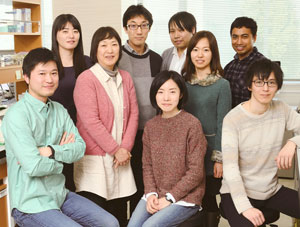 Shintaro Iwasaki (far left) and his group have discovered why the Chinese perfume tree does not poison itself with its own anti-cancer compound, a finding that could lead to new precision drug strategies. © 2019 RIKEN

That mechanistic insight could help drug developers design potent derivatives of RocA that nestle even more tightly into the cavity, says Iwasaki. Or it could lead to compounds modeled after RocA that bind structural pockets formed by different types of RNA sequences.

The RIKEN team also discovered why the Chinese perfume tree does not poison itself with its own drug compound. The researchers showed that the Aglaia version of eIF4A contains a small difference that changes the protein shape and prevents the formation of the usual RocA-binding pocket.

What is more, similar alterations were found in human cells that were resistant to the drug, suggesting it may be possible to design a predictive test for whether an individual patient will respond to RocA treatment or not.

Iwasaki and his team are now turning to nature for insights into the molecular basis of various resistance pathways. They are studying a parasitic fungus that lives on the leaves of the Aglaia tree. RocA is supposed to protect the plant from invaders, yet the fungus manages to escape the drug’s toxic effects. “We’re actively working on the mechanism,” Iwasaki comments. “Hopefully, it can help with precision medicine.”