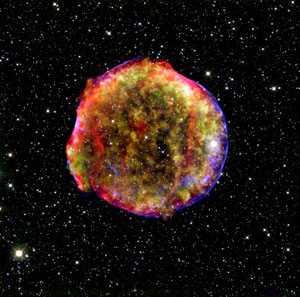 Supernovae are the dazzling displays of dying stars and the birthplace of many heavy elements, yet how these explosions originate and evolve is not fully understood. The initial burst of light fades after a few weeks, but an invisible shockwave continues to spread out, driving an ever-expanding shell of gas and dust that emits radiation for thousands of years. X-ray telescopes have picked up several of these supernova remnants, which is allowing astronomers to glean insights into their evolution.

In 1572, a supernova was spotted—one of a handful ever seen with the naked eye—and named Tycho, after the astronomer Tycho Brahe. Almost 450 years later, x-ray emissions from Tycho’s remnant are providing astrophysicists a portal to its past (Fig. 1).

Previous supernova remnant simulations assumed they explode in a sphere, but these simplified, often one-dimensional models fail to reproduce the clumpy, irregular structure of Tycho’s remnant.

Now, Gilles Ferrand at the RIKEN Astrophysical Big Bang Laboratory and his international team have used recent three-dimensional (3D) simulations of a Tycho-like supernova as the starting point for a more realistic remnant simulation. 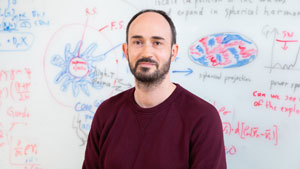 Gilles Ferrand and his team have modeled a supernova remnant in 3D, providing a new way to probe the dynamics of exploding stars. © 2019 RIKEN

“We’re bridging the gap between the separate groups modeling supernovae and those studying the remnants,” says Ferrand. “We want to see if we can use visible remnants as a probe for the explosions themselves.”

Ferrand’s team modeled the dynamics of the gas as it evolved over the 450 years since the supernova occurred. Because their realistic 3D model of the explosion captured the instability within the original blast, the team was able to closely recreate the random, clumpy structure of Tycho seen today.

“We didn’t know how long we would see an imprint of the explosion,” says Ferrand, “but now I think some of Tycho’s fluffy, irregular appearance was there from the very beginning.”

The team has created 3D models for many different types of supernova that a dying white dwarf star can produce. “We now have a way of testing whether we can tell them apart,” says Ferrand. “This will enable astronomers to assess the different ways white dwarfs can meet their end.”

Many supernova mysteries still remain to be solved, such as the appearance of heavy elements. “A clump at the edge of Tycho’s shell is rich in iron, which is surprising as iron usually forms at the center,” says Ferrand. “We want to compute the x-ray emissions from the different elements, so that we can model their distribution within the remnant.”