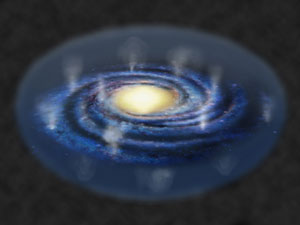 Figure 1: This artist’s impression shows the enormous halo of hot gas that surrounds the Milky Way, and the stellar explosions that feed it with fresh gas. © 2018 RIKEN

A halo of hot gas that surrounds the Milky Way has been mapped by RIKEN researchers, revealing how exploding stars have helped to shape this blazing shroud1.

The Milky Way is a spiral galaxy up to 100,000 light years across, and our Sun is just one of hundreds of billions of stars within it. The galaxy has a halo, which is partly made up of gas accumulated from the vast expanses of intergalactic space but is also molded and supplemented by matter ejected from the galaxy’s stars. The balance between these two sources is not fully understood, and there is ongoing debate about the halo’s size and shape.

To help resolve these questions, a team of scientists that included Shinya Nakashima of the RIKEN High Energy Astrophysics Laboratoryand Yoshiyuki Inoue of the RIKEN Interdisciplinary Theoretical and Mathematical Sciences (iTHEMS) Programused observations from the Suzaku telescope, which operated in orbit until 2015, to study x-rays coming from the mysterious halo.

The researchers found that the halo has a median temperature of about 3 million degrees Celsius. They also tracked how the density of gas in the disk gradually drops off with distance from the center. By comparing their observations with gas distribution models, the researchers concluded that most of the x-rays are emitted by a disk of hot gas with a mass equivalent to roughly 50 million Suns. The halo also includes a larger, spherical ball containing the mass of a billion Suns, but its lower density means that it emits relatively few x-rays.

The researchers also discovered that the disk has quite a high ratio of oxygen to iron, which is characteristic of a type of stellar explosion called a core-collapse supernova. They conjecture that these explosions may have been responsible for supplying much of the gas in the disk, an idea supported by the presence of randomly distributed hotspots in the halo (Fig. 1). “Core-collapse supernovae occur at the end of the lives of massive stars,” says Nakashima. “They provide fresh, hot gas that contains elements synthesized by the supernova.”

The team now hopes to more precisely measure the ratio of oxygen to iron in the halo using a future x-ray observatory, XRISM, which is scheduled to be launched in 2021 by the Japan Aerospace Exploration Agency (JAXA) and NASA. “We would then like to search for hot gaseous halos in other galaxies with another future x-ray observatory, Athena, to be launched in the early 2030s by the European Space Agency,” adds Nakashima.